South of the Varrock east entrance, beside the fancy dress shop 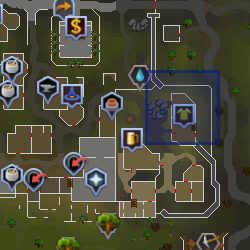 Dimintheis Fitzharmon is a noble of Varrock. He is featured heavily in two quests, Family Crest and Defender of Varrock. He is the father of Avan, Caleb and Johnathon Fitzharmon. His house is located south of Varrock's east gate, north of the clothes shop in the fenced off area.

He is the start point of Family Crest. He had given each of his 3 sons pieces of his family crest. He asks the player to locate his three sons and reunite their family crest to prove the family's nobility in order to regain his place in Varrock.

When he regains the crest, he gives the family gauntlets that can be enchanted into chaos gauntlets, goldsmithing gauntlets, or cooking gauntlets. He returns them for free if they are lost.

In Defender of Varrock, it is discovered that Dimintheis is a descendant of one of the seven Elders of Avarrocka. However he does not share the same family name as his ancestor as it is through a female ancestor who took on the Fitzharmon family name. Possible ancestors include Breana Leptoc, Edwina Halen, Lucinda Raispher, Rhee Prysin and Shauna Ravitz.

He is the only person who can successfully wield the Shield of Arrav, unlocking its magical properties. He uses the shield to slay the attacking zombies, thus saving Varrock from another Mahjarrat attack.

Retrieved from "https://runescape.fandom.com/wiki/Dimintheis?oldid=20748578"
Community content is available under CC-BY-SA unless otherwise noted.