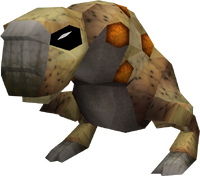 Diseased kebbits are a Hunter creature caught south-west of Oo'glog, using deadfall traps and by burning fever grass. Fever grass can also be used to bait the trap.

Diseased kebbits are part of the As a First Resort quest, where players must get rid of them to make way for a new spa resort.

Retrieved from "https://runescape.fandom.com/wiki/Diseased_kebbit?oldid=21014398"
Community content is available under CC-BY-SA unless otherwise noted.