You can obtain more of these from taking part in the great battle at Lumbridge or by gathering them from skilling around the world.

The residual life force of a dead god.

Divine tears are remnants of Guthix's life force which Zamorak and Saradomin want to steal, used in the Battle of Lumbridge. Divine tears are collected on and off the battlefield and may not be banked.

On the battlefield, divine tears can be obtained from Divine Tears Formations (Woodcutting), Divine Tears Rocks (Mining), glowing pools (Fishing) or by killing warriors from the opposite faction. Throughout the rest of Gielinor, they are obtained by killing any creature that drops summoning charms or by Farming, Fishing, Herblore, Hunter, Mining, Runecrafting, or Woodcutting, including actions at clan citadel skill plots. However, players do not gain divine tears while fishing with a heavy rod and fly fishing. Gathering from glowing crystals, glowing rocks and glowing pools provides scaled experience points towards Woodcutting, Mining, and Fishing respectively. Items such as Lumberjack clothing, the Fishing outfit and the Golden mining suit do provide bonus experience when harvesting divine tears. Obtaining tears outside the battlefield can be switched off via the battle interface.

Members can collect a maximum of 3,000 divine tears each day, while non-members players can collect up to 1,320 tears per day. During the 10th and final week of the battle, the cap was increased to 4,500 tears for members and 1,920 tears for free players. As with many other daily activities, the day begins at 00:00 UTC. Depositing divine shards will also count towards this limit, however tears gathered from yellow nodes do not. Node instability lasts 3 minutes, although individual nodes may become empty before that.

As players collect more divine tears, the amount received per harvest decreases gradually from 5 (4 for free players) to 0. This also resets each day (00:00 UTC).

After the Battle of Lumbridge ended, it was no longer possible to harvest divine tears as all nodes disappeared from the battlefield. Divine tears in the player's inventory could no longer be deposited for renown, making them useless. Any renown the player gained from already deposited divine tears could still be used to purchase rewards.

Once divine tears are collected, they have to be deposited at the collection point located in each of the faction's camp. If the player switches between factions, the contribution to the previous faction is reset.

When skilling, there is a slim chance that the player will find a deed to a certain title.

Occasionally some of the divine tears gathering spots will become unstable and change colour. When they turn orange-brown, gathering divine tears will harm the player (10% of your maximum life points). Alternatively, when they glow bright yellow, they will grant three times the normal amount of divine tears per harvest.

It is not possible to fill any type of urn by mining, fishing or woodcutting for tears.

The experience received from skilling inside the battle crater depends on the skill level as well as the token level. The formula for skilling is $ XP = (10 + \mathrm{SkillLevel}) \cdot \mathrm{TokenModifier} $, and for combat, the experience gained is $ XP = (3 + \mathrm{SkillLevelOfCombatStyle}) \cdot \mathrm{TokenModifier} $, and an additional of 10 XP and another 2.5 constitution XP. The token modifier depends on the level of your token:

Divine tears can be turned in for Renown at an exchange rate of one for one by depositing them in your faction's collection point, which can then be used to buy armour, experience lamps, titles, emotes, or single-use items from the Zamorakian or Saradominist quartermaster.

Ten divine tears can also be used to heal a champion, siege unit or a J-mod clone. 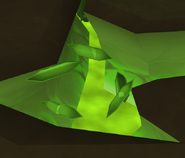 A glowing pool from which divine tears can be obtained.

A divine tears rock.
Click an image to enlarge

Retrieved from "https://runescape.fandom.com/wiki/Divine_tears?oldid=24548423"
Community content is available under CC-BY-SA unless otherwise noted.