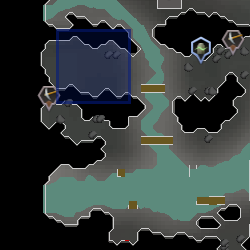 Dondakan the Dwarf is a dwarven miner and the father of Commander Veldaban. He is the main character in the Between a Rock... quest.

Dondakan has spent 18 years of his life attempting to open a seemingly impenetrable rock in the Keldagrim south-west mine. While he had many dwarves helping him at one point, they have all since left, leaving him alone in his work. He now spends every bit of money he can dredge up in an attempt to open the rock.

Dondakan has tried many different methods to break the rock, such hitting it with a pickaxe, shooting it with several types of cannonballs, and kicking it with granite boots. None have been successful, and the cost has taken a toll on him.

Once the quest is complete, he can send players to the Arzinian Mines, the largest gold mine in RuneScape, although they must be wearing a gold helmet. Players may attempt to buy his granite boots, but he will not sell them for any price offered. He has been offered gold bars and gold ores, however they were also refused. With the release of Quick Chat, players found that granite boots did not exist in the item database, and hence cannot be purchased.

He owns a small mine in the northern part of Keldagrim and grants the player access after he hears about how they exposed the Chaos dwarves during Forgiveness of a Chaos Dwarf.

Dondakan seems to be on bad terms with his son Veldaban since he joined the Black Guard, which Dondakan doesn't consider a profitable job. While Veldaban insists that there are more important things than making himself richer, Dondakan responds that there aren't, at least not for a "real dwarf". In other words, Dondakan cares more about money, while Veldaban cares more about helping people in need and doing what's right. Nevertheless, Dondakan is extremely saddened if Veldaban dies during the events of Birthright of the Dwarves, and wishes that he had spent more time with him instead of being obsessed over a rock.

Retrieved from "https://runescape.fandom.com/wiki/Dondakan_the_Dwarf?oldid=24562229"
Community content is available under CC-BY-SA unless otherwise noted.