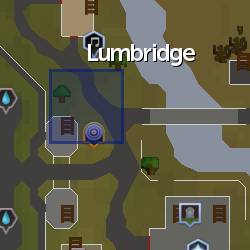 The Doomsayer stands on a box prophesying doom to everyone who speaks to him. He can be found in Lumbridge to the north of the lodestone. He warns new players about the potential risks in the game and allows players to toggle on or off warnings about dangerous content that they visit.

The Doomsayer has a natural skill for sensing danger and he feels it is his duty to warn others of the potential hazards that await unsuspecting travellers. He does this by putting up warning signs in dangerous places, accompanied with a warning message. Whilst he calls himself the Doomsayer, he feels that his proper title should be Danger Tutor.

Players would be able to toggle the warnings off from the Game Settings in Options or after the player has be warned six times.

The areas/events where the Doomsayer has placed warning signs are as follows:

These warning signs may be toggled on/off after the player has seen them roughly 6-8 times. A good way to be able to toggle them faster is to click the entrance to where the warning is given, and click "No" 6-8 times. After that period, they may switch them on or off as they like.

Retrieved from "https://runescape.fandom.com/wiki/Doomsayer?oldid=24562496"
Community content is available under CC-BY-SA unless otherwise noted.