A door or a gate is an entrance (or exit) in a wall or fence, which sometimes acts as a passage through a physical boundary. It could be an entrance into a city, into a building, into a room, or into a field (especially when outdoors). The names of particular doors or gates may include an adjective or other qualifier. For example, the guards' entrance to the Black Knights' Fortress is marked by a sturdy door.

The buildings in Al Kharid and the Kharidian Desert have a curtain that serves in place of a door. A trapdoor is a similar concept, except that it allows passage vertically downwards from one storey to another. It always has a ladder, a staircase, steps or a rope below to allow passage back up again.

Walls appear as white lines on the minimap and the world map, with doors represented by red markers. Players can pass through an open door simply by left-clicking on a location or object on the other side of it, either in the main playing area or on the minimap. See game controls for more information on moving around and on using less-common pointing devices. The character will walk through the doorway as it is no obstacle at all.

A closed door acts as a physical boundary. If it is unlocked, players can open it simply by left-clicking on it. Characters will not open a door automatically, and open doors may close after 300 seconds. Many players find this frustrating, although it may be compared to a gameworld respawn. Doors are special movable game objects and have a respawn clock just like any other object. While a longer delay could be used, the relatively short timer is presumably to cripple simple macros that are unable to open doors.

Some doors are locked, but players can often unlock them via the Thieving skill. For example, the entrance to the H.A.M. Dungeon is marked by a locked trapdoor. Players must pick the lock in order to gain access. A lockpick may be useful or even necessary to unlock some doors in this way. Some locked doors can only be unlocked with a key, usually as part of a quest.

Players can close an open door by left-clicking on it (notice that the door itself must be clicked on, not the doorway). This can be used to prevent other players or monsters from getting out of a room, effectively trapping them inside. In the past, this could be done maliciously, for example to trap a player in a room with dangerous random events like the evil chicken or a shade, although the discontinuation of those dangerous events makes that no longer a problem.

After many complaints from players, any given player can only close a door up to five times in quick succession. After this, they will be greeted with the message: "The door seems to be stuck."If they try to close an open door, they can however still open closed doors. However, some doors, such as the doors in the Piscatoris Fishing Colony and in all banks, cannot be closed by players to avoid locking players out. 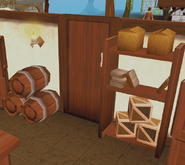 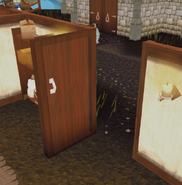 A unique private eye door from Mega May.