He seems to suffer from pins and needles. 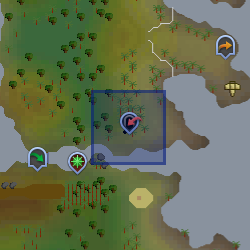 Dotmatrix is a druid standing outside the entrance to the Jadinko Lair, along with Maverick, a mercenary whom he hired after being attacked by a mutated Jadinko. He went to see the Jadinko Lair on his colleague Astlayrix's advice.

Retrieved from "https://runescape.fandom.com/wiki/Dotmatrix?oldid=24564507"
Community content is available under CC-BY-SA unless otherwise noted.