Double XP Weekends are events where players receive twice as much experience from most training activities. Double XP Weekends usually run four times a year, in January, May, August and October. Beginning on a Friday with 48 hours in-game timer to use over 14 days and ends on the Monday. The 48 hour timer was introduced to provides players more time to train.

The Invention skill works differently than other skills, in the following ways[1]:

The following actions do not provide any bonus experience:

After the announcement of an upcoming Double XP Weekend, players often prepare their accounts in order to maximise efficiency and experience gains. Prior to the start of the event, players may engage in the following activities:

Please allow the calculator to load

This Double XP Weekend was officially known as Double XP Weekend: Extended. For the first time, the Double XP Weekend offered 36 hours of double XP spread across 10 days rather than only being active for the weekend. It was designed to allow players to train in a more relaxing manner. Upon logging in, the player's Double XP timer started counting down from 36 hours. The timer did not count down while lobbied or logged out.

During that weekend, as a teaser for the player-owned farms, seven special farm animals could have been spotted around RuneScape, awarding a small experience lamp for spotting each of them and a large experience lamp once all seven were found.[6]

Invention benefits from half of the experience boosts, excluding augmented item disassembly, as usual.

The first login during the weekend prompted a pop-up ad for Recruit a Friend and the chatbox message "Double XP Weekend is live. Go go go!". Subsequent logins prompted the message "Why not team up with a training buddy? Gains are better with friends."

Immediately following the end of the event, the second batch of updates for Invention was released, along with two weeks of +50% XP boost for blueprint discovery.[10]

The second Double XP Weekend of 2017 started on Friday 19 May at 12:00 UTC, and ended at 12:00 UTC on Monday 22 May. The timing of the weekend was down to the upcoming release of Menaphos in June.[11] It did not feature a trail off period where bonus experience could still be received for a small duration, despite this being the case the weekend before.

This Double XP weekend coincided with the Spring Fayre event, however experience gained during that event was not affected.[12]

Free players received a 1.2x boost instead. The trail off period did not apply for said free players.

For the final weekend of the year, effectively 30 December to 4 January, all skilling/combat activities gave 10% more experience. Previous limitations regarding bonus experience applies.

Unlike the previous events, it was hotfixed[15] so that the following also works with the event:

The popup that appeared after 2016 DXPW.

The popup that appeared after 2016 DXPW.

The first double experience weekend of 2016 took place from 26 February to 29 February. The newly released Invention skill's experience gains were not affected by the Double XP Weekend.[17]

The second Double XP Weekend of 2015 was from 25 September to 28 September. 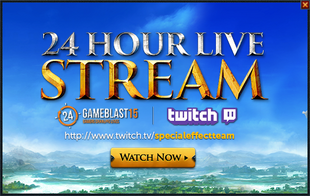 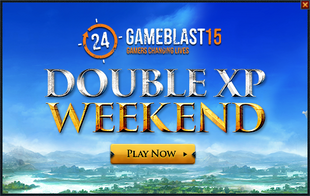 This event, as voted for by players, was in support of the Gameblast charity weekend, raising money for Special Effect. Alongside the Double XP Weekend, Jagex hosted a 24-hour long livestream on their official Twitch channel, starting at 1pm UTC on Friday 21 February. A donation page was set up for players to make direct donations to the charity. Players could also purchase the limited edition GameBlast tunic from Solomon's General Store and donate coins to the Well of Goodwill.

Message displayed upon logging in on 22 October, 5 days before the weekend started. This interface was shown everyday until the event started. It could also be toggled to no longer be shown.

Message displayed to free-players after logging in one day before and during the whole weekend offering a 5x XP bonus if they subscribe.

The fourth Bonus XP Weekend was held from 9 to 12 September 2011, as first announced in the Save 15% on the price of membership! newspost on 24 August.

The Bonus XP Weekend of March 2011 was held from 11 to 14 March. Experience gains from Balthazar Beauregard's Big Top Bonanza were not affected by bonus experience during this and future Bonus XP Weekends, though it had been previously.

When the event first started, players training Dungeoneering did not receive bonus XP, so all players' multipliers were reset to 2.7x. If a player ran out of membership during the Bonus XP Weekend at 1.1 multiplier and then they renewed their membership, the multiplier would go back to 2.7x. During this and later Bonus XP Weekends Summoning was given a flat 1.1x bonus experience multiplier, regardless of timer spent logged in.

*As 1.1 lasts indefinitely the given average assumes only a half hour period and will decline further at a longer duration.

Leading up to the Bonus XP Weekend, Jagex released an equation that gave the XP multiplier as a function of time and it was stated that the multiplier would be recalculated on every XP event, accurate to one minute. The multiplier given was

for the first 10 hours, and a constant 1.1 after that, where

is the number of hours played. This is shown in the graph on the right, which was also released with the formula.[21] This would have given an average multiplier of 1.69x over the first 10 hours of play.

However, when the event started, players noticed that the bonus xp multiplier was lower than expected; it changed every 45 minutes rather than every 30 minutes and was always a multiple of 0.1. The modifier went down 0.2 each time (2.7, 2.5, 2.3, etc.), but went down only 0.1 after it reached 1.5 (1.5, 1.4, 1.3, etc.). This was due to intermediate rounding. In the article on Bonus XP Weekend found on the front page on the Runescape website, it was said that one's XP counter would reach 1.1x after 10 hours of gameplay. Players were disappointed to find out that it actually hit 1.1x after 7 hours of gameplay.