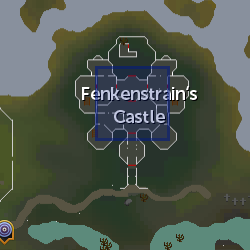 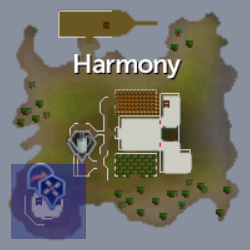 Dr Fenkenstrain is a non-player character involved in the Creature of Fenkenstrain and The Great Brain Robbery quests. Players may pick his pocket to obtain a Ring of Charos.

At first Dr Fenkenstrain was a lonely scientist who lived in parts unknown. Later on he decided to move into Morytania, but due to it being inhabited by werewolves he knew he would surely be killed. However, in order to avoid this, he obtained employment with a local rich human family who possessed the Ring of Charos, an ancient magic talisman that fools werewolves into thinking the human who possesses it to be another werewolf.

Eventually the family gardener started suspecting the disappearance of the family and a desperate Fenkenstrain sent him to dig graves in the woods. However, when the gardener left, Fenkenstrain followed him and decapitated him with a spade, turning him into the headless Gardener Ghost.

Since then, Fenkenstrain has lived alone in the castle. However, he eventually started recruiting a new assistant, leading to the events of the Creature of Fenkenstrain quest.

Fenkenstrain meets the player in this quest and asks the player to get a pair of arms, a pair of legs, a torso, a head and a brain. Upon doing this, Fenkenstrain unites these pieces into a human body and, using lightning, he brings the creature back to life.

However, the brain that was used is the one of Lord Rologarth, whom Fenkenstrain had killed years ago. Upon learning the history of the castle, the player betrays Fenkenstrain by stealing the Ring of Charos from him. Fenkenstrain - now human to the werewolves again - locks himself in the highest tower of the castle to be safe.

In the Great Brain Robbery, the player needs a brain surgeon to transplant brains into undead monks of Harmony Island, and decides to ask Fenkenstrain.

Fenkenstrain at first refuses but then acquiesces after realising that the werewolves will not get him in Harmony Island. After the surgery, Mi-Gor, the undead surgeon that had removed the brains in the first place, gets infuriated and sets his robotic bodyguard Barrelchest on the Doctor, which the player defeats.

Upon seeing Barrelchest defeated, Mi-Gor flees. Fenkenstrain decides to stay on Harmony Island (in the basement under the windmill) to atone for his past mistakes.

Retrieved from "https://runescape.fandom.com/wiki/Dr_Fenkenstrain?oldid=24562232"
Community content is available under CC-BY-SA unless otherwise noted.