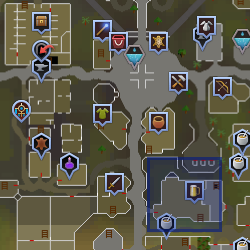 Dr. Randulf Harlow is a retired vampyre slayer located in the Blue Moon Inn at Varrock. In his many years of fighting, he has seen much evil, and has since turned to alcohol to cope.[1] As such, when Count Draynor terrorised Draynor Village, he was unable to help. He boasts about his history, claiming to have been the "besht".[2] He is good friends with Morgan in Draynor Village, sharing some of his vampyre slaying tips with him.[3]

In exchange for a beer, he teaches others how to become a Vampyre Slayer, explaining how their dark magic allows them to regenerate and providing them with a stake and hammer necessary to finish off a vampyre. He also advises they carry garlic on them.

He also appears as a zombie in New Varrock, still in the Blue Moon Inn. He has been possessed by the Spirit of the Body, who thought to use him to obtain a few lively pleasures and fight Delrith,[4][5] and can only control his body when drunk.[6] He refuses to embrace sobriety, despite the efforts of the apothecary.[6] He rejects any attempts to give him the sobriety potion, describing it as a "vile concoction".[7] It must be disguised as beer before he will take it, and afterwards he will complain about the spirit's return.

Retrieved from "https://runescape.fandom.com/wiki/Dr_Harlow?oldid=21697663"
Community content is available under CC-BY-SA unless otherwise noted.