Are you sure you want to destroy this item? You can reclaim it from Diango in Draynor.

Fit for a royal caper. 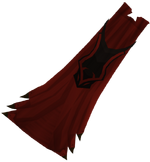 One of the unique features of this item is that, when the entire set is worn, it can be re-coloured by right clicking. This ability is also shared with the Queen's Guard outfit.

This piece, along with the rest of the outfit, was temporarily available again on 27 February 2014 as a part of the Blast from the Past Treasure Hunter promotion. The set became available once again 10 May 2017 through 15 May 2017 as reward from the Buried Treasure promotion on Treasure Hunter.

Retrieved from "https://runescape.fandom.com/wiki/Dragon_ceremonial_cape?oldid=24547065"
Community content is available under CC-BY-SA unless otherwise noted.