Start a Wiki
OS
This article is about the platelegs version. For the plateskirt version, see Dragon plate armour set (sk).

Dragon armour is currently one of the best sets of defensive armour that doesn't degrade. The third age armour is slightly better, but has prices which exceed other sets easily. Torva and Barrows armour have higher stats, but degrade and cost coins to repair. 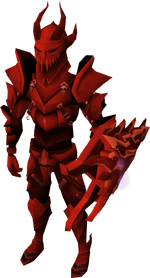 Retrieved from "https://runescape.fandom.com/wiki/Dragon_plate_armour_set_(lg)?oldid=24541754"
Community content is available under CC-BY-SA unless otherwise noted.