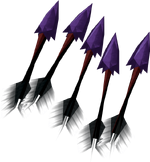 Enchanted dragonstone bakriminel bolts have a 5% chance of triggering the Dragon's Breath effect, which hit the target a second time for 25% of your current attack as dragonfire. Dragons and those under dragonfire protection such as a anti-dragon shield/dragonfire shield or antifire potion are immune.

Onslaught can trigger the effect but the dragonfire hit won't trigger recoil damage.

Sacrifice can trigger the effect but won't heal from the 2nd dragonfire hit.

Retrieved from "https://runescape.fandom.com/wiki/Dragonstone_bakriminel_bolts_(e)?oldid=24561086"
Community content is available under CC-BY-SA unless otherwise noted.