The Draynor Bank Robbery was a bank break-in, with criminal damage, several murders, and robbery which happened in Draynor Village. The only suspect is the Wise Old Man; there are some theories that Cool Mom227 aided him, though Mod Ash claims this to be untrue.

The main source of evidence is the security recording inside of the bank. Players can watch this recording by talking to the bank guard standing by the broken wall. The recording can be viewed again by paying the guard 50 coins.

The Wise Old Man responds to a player's question about the robbery in letter six of the twelfth Postbag from the Hedge.

Cool Mom227 lured the market guard patrolling the market away from the Wise Old Man, but it was confirmed[1] she wasn't involved in his plan, making it merely a coincidence. If it wasn't for Cool Mom227, he would most likely have killed the market guard rather than had him distracted if he regarded him a serious threat.

The old man kills Purepker895 as he exits his house using an unknown powerful spell (which looked similar to Saradomin Strike, being lightning, and sounded like Earth Wave). Olivia, who witnessed the player's murder, was quickly teleported away before she could do anything. However, she did not see that the culprit was the Wise Old Man, due to an open door being between them.

The man destroyed a section of the bank's wall, killing the two bankers who attacked him.

The suspect then killed witness Elfinlocks, 1337sp34kr, and Qutiedoll before casting Telekinetic Grab on Elfinlocks' partyhat. He then was supposed to get the pillory random event, but he killed the Pillory Guard, who attacked him, with ease (First, it was the level 80 spell Charge, then a Saradomin Strike which hit 2000 life points, and a special kick), then finally forced the last surviving banker to give him all of the money.

He spotted the security tape, and broke it so no more could be viewed (even though it didn't work).

There is evidence towards further potential robberies, most likely the Wizards' Tower. The Old Man's telescope points there, and in his strange book, it is written he is low on runes and the wizards have more. His shelves are full of tinderboxes, so it is possible that he plans to burn the tower down, like it had been burned down before, and steal the wizards' runes.

There are also three log respawns on the ground floor of the tower, further pointing towards the fact that the Wise Old Man intends to burn down the Wizards' Tower; Dionysius has outright denied this to players who note this angrily to him, but his own words in certain Postbags from the Hedge believe this.

The player can also speak with the Bank Guard who showed them the magical recording of this and comment the robber looked familiar, while the Guard replies that he, too, is aware of the robber's identity. When the player informs him that the Wise Old Man has admitted to his crimes, the banker replies that the amount of evidence against him makes such a confession nearly unnecessary; the player next asks the Guard whether they will arrest him, the Guard tells the player that "We're certainly keeping an eye on him. I'm afraid I can't give you any more details of the case." 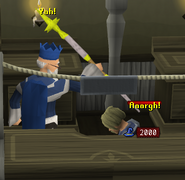 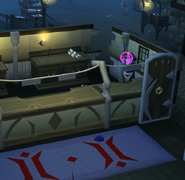 Retrieved from "https://runescape.fandom.com/wiki/Draynor_Bank_Robbery?oldid=23031349"
Community content is available under CC-BY-SA unless otherwise noted.