Start a Wiki
OS
This article is about the random event. For the non-player character who runs it, see Sergeant Damien. 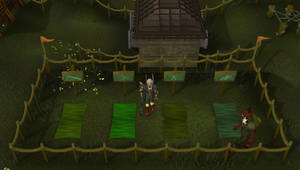 Drill Demon was one of the random events that players may have experienced whilst playing RuneScape. Players were asked to complete four exercises that the demon instructor, Sergeant Damien, commanded them to perform. Upon completing his demands, Damien would teleport the player back to where he/she was and give him/her a Random event gift.

This random event was available to both members and non-members. 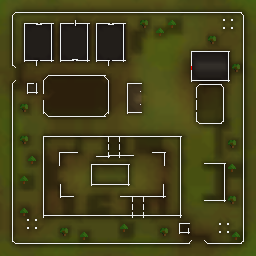 The Drill Demon random event took place in a small, roped-in exercise area surrounded by an unreachable obstacle course. Sergeant Damien may have demanded that players do any of four different exercises. Each exercise had its own exercise mat and sign next to the mat to describe what exercise the player could do on the mat. If players chose the wrong mat, they had to do an additional exercise to complete the event. When players finished the event, they could return to their original location and receive a random event gift. Updates to random events had made the event more difficult. When the player completed one exercise, the mat automatically changed to a different location. Therefore, if the player had to perform the same exercise multiple times a row, they will have had to click on a different mat.

Sergeant Damien will shout insults at players who perform the incorrect exercise.

The reward was a random event gift from which players could claim the usual rewards such as experience lamps and ores or a costume point for a piece of Camouflage clothing.

Some agility pipes and some netting.

An area with archery targets.

An area with cannons and carts.
Click an image to enlarge
Retrieved from "https://runescape.fandom.com/wiki/Drill_Demon?oldid=23081526"
Community content is available under CC-BY-SA unless otherwise noted.