What an eccentric little fellow! 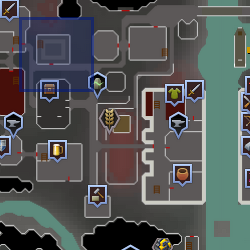 Dromund is a dwarf involved with The Giant Dwarf quest. He can be found in the North-west corner of West Keldagrim (in the building just East of Quality Weapons). In the quest he has the Exquisite boots needed for the quest. The player has to take the left boot while he's not looking, then go outside his house and telegrab the right boot at his window while he is not looking. Players can not normally grab the right boot due to the cat and Dromund catches anyone trying to use magic inside the house.

Dromund also has a cat in his house, sitting next to the boot that the player must steal. You don't need to worry about the cat "seeing" you take the boot, though, but if the player has a Catspeak Amulet, they can talk to the cat just for fun.