Druidic Ritual was the introduction to the Herblore skill. Until the completion of the quest, players could not gain Herblore experience in any way. You must aid the druids in gathering supplies for a ritual in exchange for knowledge in Herblore. This quest was reworked on 31 January 2012.

To start using the Herblore skill, you will need to ask for some training from the druids. However, they require some help with a ritual before they will help you.

Speak to Kaqemeex in the stone circle north of Taverley. He tells you that the stone circle south of Varrock used to belong to them but was taken over by the Dark wizards. He asks you to speak to Sanfew.

Speak to Sanfew, located upstairs in the Herblore shop marked with a herb sign in the central part of Taverley. He is on the 1st2nd floor[UK]. Tell him that Kaqemeex sent you. Sanfew needs you to place a piece of raw rat meat, raw bear meat, raw beef and raw chicken, one each, in the Cauldron of Thunder.

You can either kill these animals to obtain the meats yourself or you can buy them from Rufus in Canifis or the Grand Exchange.

A good idea would be to teleport to Lumbridge Castle and make your way north towards East Varrock. If you do this you will come across cows, chickens, a bear and a giant rat, giving you all the raw meat you will need. Cows and chickens can be found in Lumbridge, giant rats and a bear can be found south of the south-east Varrock mine and south-east of goblin village.

The Cauldron Of Thunder

The Cauldron of Thunder is located in Taverley Dungeon, south of Taverley. If you have a low combat level, it is advised that you bring food with you for the next part. Gather all your meat and head south of Taverley and down the ladder.

When you are down there, keep walking north, past the skeletons until you see two suits of armour on stands next to a gate. When you attempt to open the gate, they will attack you. Their combat level is 19 and they have 290 life points, so get prepared for the battle if you want to. Kill or ignore them, and walk in. (If you don't see any suits of armour by the entrance nothing will attack you)

One can also run past the gate, following the wall on your right, around the turns (including the tight hairpin turn just past the gate), until you come back around to the back side of the gate, avoiding combat completely.

You will now see a cauldron. Use the raw meats in your inventory on the Cauldron of Thunder and you will notice they will turn blue. This will give you Enchanted bear meat, Enchanted beef, Enchanted chicken, and Enchanted rat meat.

Leave the dungeon the same way you entered and go and speak to Sanfew. He will take the meat off your hands and tell you to speak to Kaqemeex. He will tell you about the herblore skill. 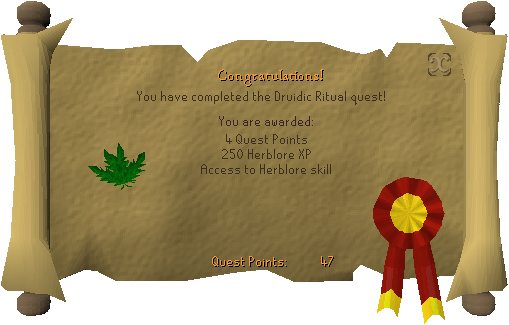