He looks like he's ready to take on the world. 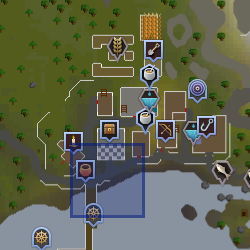 The drunken mariner is an old sailor found in Catherby, who informs the player on the Battle of Lumbridge. He loves battle, describing the battle going on between Saradomin and Zamorak near Lumbridge as "a lot of fun", and his love of battle is apparently what led him and his shipmates to dry land, as he didn't wish to miss the battle between the pair[1].

His love of the sea is apparently greater than his love of battle however, as soon after arriving, he claims that the sea calls him back, and soon intends to head back to the ocean and to leave the pair to their squabble. Nevertheless, he seems happy to encourage the "landlubbers" to join the battle between the pair, telling them that they are looking for help, and that there are plenty of rewards.

Retrieved from "https://runescape.fandom.com/wiki/Drunken_mariner?oldid=24564943"
Community content is available under CC-BY-SA unless otherwise noted.