View source
watch 02:34
Fire Emblem Warriors: Three Hopes - The Loop
Do you like this video?
Play Sound
RSCOS
This article is about the Duke of Lumbridge. For other uses, see Horatio (disambiguation). 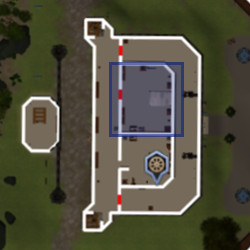 Duke Horacio is the ruler of the duchy of Lumbridge, including the town and its surrounding area, and a vassal of King Roald Remanis III of Misthalin, with whom he maintains a good friendship.[1]

Duke Horacio is one of the four NPCs who can teleport to the sandcastle building area in the Summer Beach Party. While he is present, building the Lumbridge Sandcastle (a replica of the Lumbridge Castle) will grant double experience.

Assuming that he was between 0 and 2 years old when his father took him to Crandor in 129, and 10 to 12 years old (which he describes as being little) when Crandor was destroyed in 139, Duke Horacio is between 41 and 43 years old. He was previously married to Duchess Oriana, but she died sometime prior to 169.

He inherited the position of duke from his father, and it has been passed down in his family for many generations. It was first granted to his ancestor Polonius by King Claudius of Varrock, and it was Duke Polonius who built the current Lumbridge Castle on the site of the original wooden fort.

Horacio now rules Lumbridge as a vassal of the King of Varrock. His servant is Hans. Horacio is proud of Lumbridge's reputation as a welcoming and accepting place. In the final stages of the Zamorakian Insurrection of 165, he rode through Silvarea next to King Roald, their troops behind them, and participated in the Second Battle of the Salve.

His duties include the day-to-day managing of Lumbridge and the organisation of the Lumbridge Guardsmen. He is also a member of the Secret Council of RuneScape.

Horacio would eventually marry Duchess Oriana who later died of an unspecified cause. He hired Uri to bury her, which he did, but not before looting her valuable obsidian jewelry.

He would eventually hire Sigmund as his advisor. While Horacio knew he was part of the H.A.M cult, he did not seem to mind.

The following takes place during The Lost Tribe.

During the year 169 of the Fifth Age, Horacio would learn from one of his citizens that there had been a breach in the castle cellar. When he investigated, the breach had been filled and he believed that it was just a smaller earthquake due to a series of earthquakes. Sigmund was persistent in finding the culprit and tasked a passing adventurer to investigate. When they found a strange brooch and brought it before Horacio, Sigmund assumed that it was stolen as goblins were never known for crafting well-made goods.

Believing goblins were attempting to invade underground, Horacio mobilised the army to combat the supposed threat, but not before asking the adventurer to learn about their enemy. The adventurer, with the assistance of the goblin generals Wartface and Bentnoze, who taught them ancient goblin emotes, encountered the Dorgeshuun, a goblin tribe that defied Bandos' orders and hid underground. The adventurer learned they were peaceful and reported it to Sigmund, who told them that some of the Duke's silverware was missing and told them to find it, or it would be an act of war by the Dorgeshuun.

The adventurer eventually found the "stolen" silverware in the H.A.M base, which Sigmund had stolen. Upon learning of this, Horacio became enraged and dismissed Sigmund, eventually signing a peace treaty with the Dorgeshuun.

The following takes place during Death to the Dorgeshuun.

While Horacio does not appear in the quest, after learning that the H.A.M cult attempted to flood Dorgesh-Kaan, Horacio ordered the cult to stop attempting to directly intervene between the affairs of Lumbridge and Dorgesh-Kaan. While Johanhus Ulsbrecht, the H.A.M leader complied, not wanting to enrage Horacio, Sigmund refused and split off to create his own extremist faction.

When Sigmund attempted to escape a third time from Zanik and the adventurer, Zanik, possessed by Bandos, cut off his hand that possessed a ring of life. Due to its nature, Horacio would find the hand in the castle's courtyard.

The following takes place during Battle of Lumbridge.

With the death of Guthix and the Edicts of Guthix shattered, Zamorak and Saradomin converged onto a leak of Guthix's residual life force in an attempt to claim it. Their resulting appearance caused massive destruction to the nearby area, even collapsing some of the castle's walls. The Lumbridge Guardsmen soon sprang into action to keep the fighting held in the crater.

The sudden occurrence of the battle gave him a large amount of issues, and Horacio sought advice on the allocation of resources in Lumbridge's reconstruction. A new vote was available every week (bar the final two), along with a reward of bonus experience. After the battle was over, Horacio praised the Lumbridge Guardsmen for their valiant efforts, and Foreman George for helping his citizens.