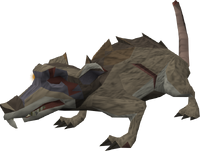 Dungeon rats are a type of rat found in caves, sewers and dungeons underneath the city of Ardougne.

A group of them play a key role in the Clock Tower quest, in which the player poisons their food trough, which causes them to attempt to escape by chewing away a railing, which allows the player to grab the white cog.

They are fairly easy foes to defeat, and don't give very much experience on death, As such, training on them is not recommended.