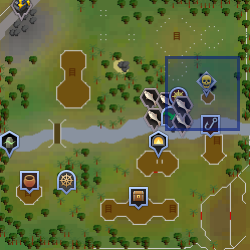 Duradel is the third highest level Slayer Master and the father of Kuradal. Players must have at least level 50 in the Slayer skill, 100 combat and have completed the Shilo Village quest before they may access him and receive Slayer assignments from him. Duradel is found on the 1st2nd floor[UK] north of Fernahei's Fishing Hut in Shilo Village. Alternatively, if Lunar Diplomacy is completed, the spell NPC Contact can be used to speak and get assignments from him. He is wearing a cape of legends.

Duradel excelled in Slayer and combat, and aspired to become the greatest Slayer master. He took a potentially questionable path, the details which he does not reveal to prevent others to be tempted, to reach his goal. Duradel eventually successfully became the most powerful Slayer master, and remained so for a time.

Duradel trained Vannaka, his talented student, who would eventually rise to the rank of Slayer master in his own right. At some point, Vannaka challenged Duradel to be the strongest Slayer master, only to be defeated by him with a rare and powerful weapon. Vannaka accepted defeat, and Duradel remained the most powerful Slayer master then.

Duradel married and had a daughter, Kuradal. Kuradal was very close to her father, and from a young age, was trained by him in combat and Slayer skills. Kuradal became very proficient in Slayer and combat, and also quite competitive, aspiring to be the best. Eventually Kuradal surpassed her father, and now gives Slayer tasks greater than those which her father would assign. Kuradal was later surpassed by her own student, Morvran, an elf of the Iorwerth Clan, who became a Slayer master himself, offering even greater Slayer challenges than Kuradal's, following the restoration of Prifddinas.

At some point, Duradel separated from his wife. Kuradal had been making preparations for bringing her mother and father back together, prior to Duradel's death.

The following takes place during While Guthix Sleeps.

Duradel was one of eight warriors recruited by an adventurer to hunt Lucien. After his recruitment, Lapalok replaces him in Shilo Village as the third highest-level Slayer master. His replacement was intended to be temporary at first, as Duradel would be unable to perform his usual Slayer master duties while at war. Lapalok, as the Disciple of the Devourer, seemed quite eager to send Duradel and the adventurer away to war, where he expected both would meet destruction.

Upon questioning him in the White Knights' Castle as he prepares for his fight, he reveals he was being kept in Shilo Village by an unknown higher authority, and required special permission from them–he seemed to communicate telepathically with them–to leave for his part in the battle against Lucien. He reveals that, apparently, he took several shortcuts and 'trod on very important toes', as he puts it, to become the greatest Slayer master–which he was at the time, before being surpassed by his daughter, Kuradal. Unfortunately, he would not reveal any more information to the adventurer, and stated that he will take this secret to the grave to avoid tempting others including the adventurer. He does just that.

The group attempts to save the adventurer from Lucien in the Wilderness. They engaged in battle with Lucien and his undead army. It is revealed during the battle that Duradal has a combat level of 197. Duradel is one of the six who perish in the ensuing battle, all six of whom were fighting Lucien directly. Lapalok then replaces him permanently as Slayer master.

After this quest, a statue of Duradel is fittingly placed next to a statue of Turael at the entrance to the Slayer Tower near Canifis, and two more statues can be found in Falador along with the other five heroes: around the lake in Falador Park and lining the bridge to the White Knights' Castle.

Completion of a task assigned by Duradel will grant you:

This means that if using Duradel over the long term, an average of 24 points will be granted per task.

Duradel's special task is for the player to slay monsters in the Slayer Tower in a single trip without leaving the tower. The numbers of monsters that must be slain are:

As the player kills the required number of each set of monster, a notice appears in the chatbox that the player has killed enough of the monster for the challenge.

Note that level 85 Slayer is needed for this task to kill every monster in the Slayer Tower. All monsters will use either magic or melee attacks so either Ganodermic armour or the use of prayer can easily destroy most of the monsters. A Full slayer helmet and the ability to destroy specific monsters would be highly recommended.

The reward for completing this task is a bonus of 20,000 Slayer experience and 35 bonus Slayer points.

Note: If you leave the Slayer Tower and do not return in the given time frame, it will cancel your special assignment but will not reset your slayer task count.

For Duradel, assuming all possible assignments are available, $ S $ = 390.

Retrieved from "https://runescape.fandom.com/wiki/Duradel?oldid=24609799"
Community content is available under CC-BY-SA unless otherwise noted.