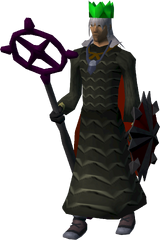 Durial321 is the spirit of an infamous player killer who appears in the Falador Massacre (10th anniversary event). He is based on a player of the same name who caused player deaths by abusing a bug during the original Falador Massacre glitch in 2006.

Damage dealt against him is scaled down with his remaining life points. At 10,000 life points or lower the vast majority of hits he takes are reduced to 1, making it extremely difficult to finish him with regular attacks. Dying repeatedly next to him with Retribution or Wrath active and no food in backpack can finish him quite quickly.

When he kills players, he heals from the food left in their backpack, so banking or eating all your food is recommended.

If he is lured outside of Falador, he teleports back to near the furnace.

Retrieved from "https://runescape.fandom.com/wiki/Durial321?oldid=25381064"
Community content is available under CC-BY-SA unless otherwise noted.