A contract for a dwarf squad.

The Dwarf squad (heavy) is an item used in Mobilising Armies. When used during a game, it will become a squad of dwarves. They use melee, which means they are weak against Elf squads and dominant over Goblin squads. They have a combat level of 350, 10,100 life points, and level 60 discipline, but they move at half the speed of light dwarf squads. They wear a brown dwarf outfit carrying a black battleaxe with silver blades, and find ores, gems and coins while exploring. If they die during a game, the item will become a Dwarf squad (heavy) (defeated). 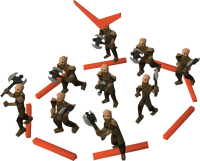