• He seems to be in charge of the ship on the river.
• His ship miraculously survived the crash into the statue earlier. 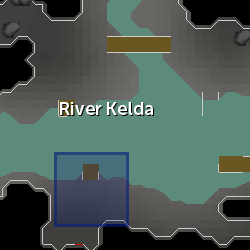 The Dwarven Boatman is a dwarf that can be found in the Keldagrim south-west mine. He is also involved in the quest The Giant Dwarf.

The dwarven boatman runs a free ferry service across the River Kelda which runs between Keldagrim and the mines to the south. When a player first uses him to reach the city, they will begin the Giant Dwarf. Despite his ship being damaged when it crashes into the statue of King Alvis, he will always take players on his ship, even after the quest.

During Forgettable Tale..., it is revealed that he is actually being bribed by The Red Axe. The crash was not an accident, and was actually planned by the company's director, Hreidmar. The boatman was to take a human to the city and destroy the statue, therefore getting the human blamed for the accident. Fortunately, Commander Veldaban did not put the human in prison and allowed them to fix the statue.

Retrieved from "https://runescape.fandom.com/wiki/Dwarven_Boatman?oldid=24927511"
Community content is available under CC-BY-SA unless otherwise noted.