He seems to be in charge of the ship on the river. 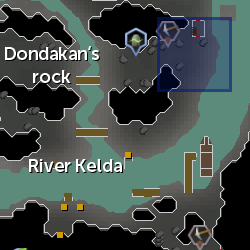 This Dwarven Boatman hauls gold ores mined by players who have finished the quest Between a Rock... He will take a cut of the ore mined for himself as a charge for this service, but will bring the rest to the bank in Keldagrim. He can be found in the Keldagrim south-west mine to the east of Dondakan the Dwarf and the Arzinian Mine.

Players equipping a Ring of Charos (a) while talking to him will find he cuts his fee in half.

Retrieved from "https://runescape.fandom.com/wiki/Dwarven_Boatman_(ore_hauler)?oldid=24927508"
Community content is available under CC-BY-SA unless otherwise noted.