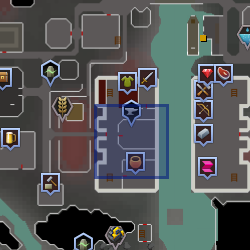 The Dwarven Engineer is a dwarf that can be found in the dwarven capital of Keldagrim, in the west side of the Consortium's palace. He currently works in Wemund's Wrench Warehouse, a small shop that sells dwarven steam engine components.

The dwarf engineer was once a miner that worked in one of the Consortium's mines south of the city. Unlike many dwarves in such a position, though, he was proud of his job and earned above average pay. However, he caused an unspecified mining incident, leading to his removal.

Unemployed, the engineer eventually found work for Wemund, the owner of a small steam engine shop on the city's wealthy west side. He used his knowledge of steam engine technology to become an assistant in the shop. However, he never recovered emotionally from his failure, and soon found the job to be low-paying and dead-end. Today he is in a constant state of depression, and usually avoids visitors.

He also plays a small role in Between a Rock.... During the quest, he gives the player a piece of a blueprint necessary to refit Dondakan's Dwarf multicannon so that it can fire a human.

Retrieved from "https://runescape.fandom.com/wiki/Dwarven_Engineer?oldid=24927502"
Community content is available under CC-BY-SA unless otherwise noted.