The Dwarven Mine (called the Dwarven Mines on the RuneScape world map) currently contains every non-quest ore (no blurite or bane ore). It even contains runite ore, but only in the resource dungeon inside the mining guild. Silver ore can only be found in the resource dungeon inside the main mine. It is one of the largest of the major mines. Competition for ore can be fierce. In Free-to-play worlds, it is often difficult to mine a single iron, coal, or gold rock before being beaten to it by a high-levelled player. On Member worlds, competition often involves the gold, mithril, and adamantite rocks.

The southern end of the mine near the Mining Guild entrance is dangerous to lower- and medium-level players, as there is a severe infestation of aggressive Scorpions and King Scorpions. Players need a combat level of 79 to be left alone by the king scorpions so they can mine peacefully. Players with level 60 Mining or higher may access the Mining Guild through the door in the southernmost part of the mine.

In recent times, water melting from Ice Mountain has eroded part of the mine, opening up a chasm to a deeper cave system, the Living Rock Caverns. The caverns can be accessed from the mine.

The Dwarven Mine received a graphical update when the Perils of Ice Mountain quest was released. The graphics were reworked again on 6 October 2010, with the release of the quest The Void Stares Back. 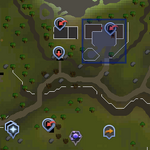 The mine is located north of Falador, west of Gunnarsgrunn, and south of Ice Mountain.

There are several shops in the Dwarven Mine:

Low-levelled ores, such as copper, clay and tin rocks are all located south of the main entrance (from the Ice Mountain). The higher level ores, such as coal, gold, mithril, and adamant rocks are near the Mining Guild. Two gold rocks are located to the east of entrance to the Mining Guild. Seven coal rocks may be found to the west of the entrance. Slightly north-west, there are three adamant rocks, two mithril rocks, three coal rocks, and three iron rocks. To the east, there are stairs leading to the Falador entrance. Further north, there are iron, tin, copper and three coal rocks.

The mines are a good place to train Mining using iron ore because there is a bank deposit box in the resource dungeon.