RuneScape Wiki
Register
Don't have an account?
Sign In
Advertisement
in: Members' items, Items that are always kept outside the Wilderness on death, Untradeable items,
and 16 more

You can get a new axe from Major Rancour - the combat tutor - in the camp southeast of the Burthorpe lodestone.

The dwarven army axe is a tool that serves as a steel hatchet, steel pickaxe, needle, tinderbox, chisel, knife, and low-level slash one-handed weapon, in one item. It has no requirements to wield. Players can receive it from Major Mary Rancour who is located in Burthorpe and asking for "free stuff". She can also replace it should players lose it. Although this is a members-only item, non-members may still claim it and benefit from the +3 bonus from activities listed below by having it in their inventory.

Its damage is a bit higher than that of the Iron longsword, but its hit bonus is lower with the speed and damage type the same. This cannot be added to the tool belt and if it is equipped, the player will use this tool instead of the pickaxe or hatchet in the tool belt even if it is higher tier than the army axe.

With this item, bonus experience will be given all throughout RuneScape. Every action listed below will grant 3 more experience when the axe is wielded or in your inventory.

The dwarven army axe in pickaxe form, which is now discontinued. 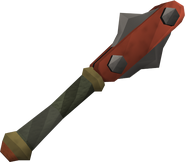