Eadgar's Ruse is a quest in the Druid's Circles quest series. It revolves around a certain item that needs to be obtained for the druids to continue their efforts to reclaim their stone circle.

Sanfew requires a rare herb for the next part of the purifying ritual.

Travel back to the Troll Stronghold to find this herb that the trolls use as an ingredient for their favourite dish.

Start the quest by speaking to Sanfew, who lives in the building just southwest of the Summoning instructor, in Taverley. Select the second dialogue choice and then choose "Have you any more work for me, to help reclaim the circle?" and then select the top option. He will tell you he needs assistance with getting a herb called goutweed.

Only the trolls in the Troll Stronghold know where to find goutweed, so Sanfew will suggest you speak to his friend Eadgar who lives near there at the top of Trollheim.

You need to make your way to Trollheim using the same route as in the Troll Stronghold quest. Or you can enter the cave by using the fairy ring code ajr and walking directly north-east into the camp stronghold from the secret entrance that you exited from during the quest. From there, you can climb out of the cave, and head to the top of Trollheim.

Equip your climbing boots, go north from Taverley to Burthorpe and follow the path through the dwarf's cave. Climb over the rocks and head towards the Troll arena. Follow this path and run past the thrower trolls (Using Protect from Missiles if possible, as they can cause lots of damage very quickly). If you have 47+ Agility you can avoid the thrower trolls completely by using the Agility shortcuts on the mountain.

Eadgar's Cave is on top of the mountain with the thrower trolls, the world map marks this as Trollheim. (The destination is masked by a Mini Obelisk icon on the World map.) When in the cave, ask Eadgar about goutweed. He will recommend you go see a Troll Cook.

If Eadgar isn't in his cave, you will need to rescue him like you did at the end of the Troll Stronghold quest. There is a cave called "Secret Entrance" northwest of where the dwarf's cave exits that takes you straight to the jail cells.

Leave Eadgar's cave, go back down the hill and head north west, following the path round into the Troll Stronghold. If possible, use Protect from Melee if the trolls attack you.

Head south once in the cave to go down the stairs. You will see four troll cooks here - one of them will be called Burntmeat. There are no aggressive trolls in this area.

Speak to Burntmeat and he will offer to tell you about goutweed in exchange for a human to cook in his stew. Agree with him, then go back and talk to Eadgar.

Upon returning to Eadgar, he will tell you that he needs a parrot in order to fool the Trolls into thinking you have given them a human.

Go to the zoo in Ardougne and talk to Parroty Pete at the north part of the zoo near the wolf enclosure. He will tell you that their favourite food is pineapple chunks, and that they will get drunk if you feed them vodka. Be sure to ask him both of the possible questions or else you will not be able to mix the ingredients.

Use your vodka on your pineapple chunks to make alco-chunks and then use them on the aviary hatch on the west side of the parrot cage. You will obtain a drunk parrot and will tell Parroty Pete that you will take it to the vet. If you drop the parrot it will fly away and you will need to go back and talk to Eadgar to get it back.

First, to make it talk like a human, you'll need to hide it on the bottom floor of the troll stronghold (use the stairs in the north), under a rack north of the cells in the prison. Here it'll pick up the 'right kind' of sayings. Leave the parrot under the rack and head back to Eadgar.

Now take care of the other tasks. These tasks can be done in any order:

After you have done all of this, Eadgar will tell you that you need to be able to make a troll potion so that Burntmeat will not lie to you about goutweed.

Search all the grassy areas near Eadgar's cave until you find a troll thistle growing in a patch of grass. Switching to high detail may help players spot the patch with the troll thistle. Note that it spawns in a different grass area every time it is picked. If you search and cannot find it, try logging into a different world.

Once you have found it, dry it on a fire to turn it into dried thistle (there are fires outside the Troll Stronghold, but you can also set your own fire). Then grind it in the pestle and mortar to make ground thistle. Finally, add it to your unfinished ranarr potion to make a troll potion.

Talk to Eadgar again. He will take the potion off of you and tell you that the parrot has heard enough by now, so you can get it back.

Go back to the prison cells in the Troll Stronghold and search the rack to retrieve the parrot and then give it to Eadgar. He will make the parrot into a fake man and give it to you.

Go back to the cooks in the stronghold and give the dummy to Burntmeat. He will give you a piece of burnt meat as a reward. He will also tell you that the goutweed is kept in the storeroom and that you can find the key by searching the kitchen drawers.

Search the drawers in the south east corner of the room, and once you have the storeroom key, go down the stairs on the north wall of the kitchen, and follow the hallway to the storeroom.

Here you must sneak past the guards to get to a crate with the goutweed. If one of them sees you, he will knock you out and you will wake up just outside of the storeroom. You can follow right behind the trolls or right next to them and you will not get hit. Sometimes while running through guards, if you are one square or so away, they will not notice you, especially at the door. The only way for them to kick you out is if they face you. If you can avoid doing this you will be able to get the goutweed. It is also recommended to gather two while you are here if you plan on completing Dream Mentor afterwards.

A tip to getting past the trolls is to go to the far east corner, and if timed correctly, use the Surge ability whilst facing south, skipping a large portion of the troll guards.

Alternatively, you must hide in safespots and wait for the guards to pass. The safespots are U-shaped areas with boxes on three sides.

Run to the first safe spot, which is the middle safespot in the third row of boxes from the entrance, after the trolls patrolling the first row and the eastern second row just pass you. At the first safespot, watch the two trolls patrolling the easternmost column of boxes. Wait for the troll which travels north on the western side to make the turn to the east, then run to the safespot on the southern side of the third row.

Wait until the troll guard approaching you from the south has turned the west, then run to the crate with the goutweed. Make sure that you are standing to the side of the crate or you will get caught.

Search the crate and you will obtain some goutweed, after which you will get caught. It is possible to click the crate opposite the crate guard and then you can just stand there. If you do not wish to take damage after getting the goutweed you can flash protect from range when you get the message that you got the goutweed. This will block the damage.

Alternatively, if you're finding it hard to figure out how to dodge the guards, you can click directly on "search goutweed" inside the storeroom, and each time the guards throw you out you will walk back in by yourself, without clicking search again. You will keep doing this until you finally get the goutweed. You will have to keep a lookout for health points and run energy but if you're a high enough level you won't need to.

Another way to quick reach the goutweed is to run along the northern wall after the guard turns the northeast corner. Once at the northwest corner, use the Surge ability to go south past the guard walking along the western wall.

Yet another method is to wait for the two guards that touch the west side of the wall just south of you to pass, then run south, around the corner hugging the wall for another safespot (make sure you step in 1 tile further so the southeastern guards can't see you). Once there, wait for the two guards south of you to walk along the eastern wall, and run or surge south on the west side of the boxes.

Give the goutweed to Sanfew to finish the quest. 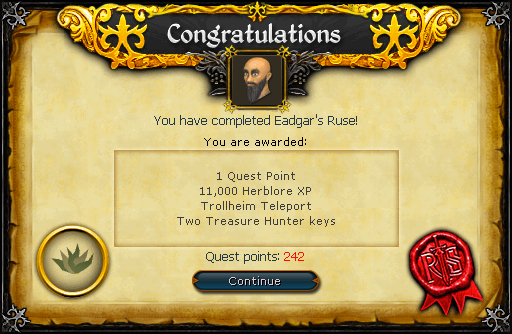 Completion of Eadgar's Ruse is required for the following:

Retrieved from "https://runescape.fandom.com/wiki/Eadgar%27s_Ruse?oldid=24926229"
Community content is available under CC-BY-SA unless otherwise noted.