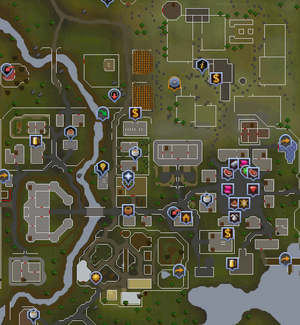 East Ardougne (pronounced ɑrdɔɪn; "Arr-doyn"[1]) is the eastern of the two districts that form Ardougne, the capital of Kandarin. It is in the members area of Gielinor and is likely to be one of the wealthiest and most well-protected cities in RuneScape. Its neighbour, West Ardougne, governed by King Tyras, is closed off to the general public because of a plague affecting the inhabitants, but players may gain access by finishing parts of the Plague City quest. East Ardougne is most known for its wealth, zoo and the theft-stricken marketplace. East Ardougne was governed by King Lathas until Plague's End, during which Lathas is replaced by his cousin, King Thoros. Its newspaper is called The Ardougne Chest.

Ardougne is a relatively young city, having been founded in the Fifth Age. Ardougne began as a small trading town, relying on wealth flowing through the Southern Sea to sustain itself. Following a major battle at the Outpost, Ardougne had some major improvements. One man, a follower of Zamorak, founded the marketplace, and another (the great grandfather of King Lathas) became its first king. It has since become a thriving market hub, its wealth growing beyond any known city in Gielinor.

Although Ardougne is a relatively young city, the history which surrounds it is far more ancient. Since the First Age, the land upon which Ardougne now stands has been key to the survival of many races in the region. Players who complete the Making History and Meeting History quests can discover more of the history of Ardougne and the Outpost.

In the late First Age, a man named Roger arrived in Gielinor from another dimension after being brought through the Portal of Life by Guthix himself. Roger and his family were amongst the first humans to arrive in the newly-shaped Gielinor. They travelled west from where they had been brought, apparently somewhere in what is now modern-day Misthalin or Asgarnia.

Roger's family managed to travel across the mountain chain that once dominated northern Asgarnia, eventually settling permanently in the Ardougne area. Apparently, Roger's family allowed travellers to lodge in their cabin, encouraging hesitant wanderers to travel further afield. From this point onward, the area would remain central to the region.

The city is left to his sons, Lathas and Tyras. The two brothers split the city in half.

A player teleporting to the wilderness and back with the lever.

The Ardougne Zoo is the only zoo in RuneScape. The Zoo is surrounded by an outer fence and contains several fenced-in exhibits housing animals such as monkeys, penguins, bears, and ogres. Several zoo keepers are in charge of the zoo. Players can talk to the zoo keeper named Charlie to begin the Eagles' Peak quest and talk to the ex zoo keeper named Larry to begin the Cold War quest. The paths between the Zoo's exhibits merge to form a road leading out of the south entrance of East Ardougne.

This is the castle where King Lathas lives. It is inhabited by many Paladins. A few quests can be started here and there are a few chests to loot. It is located in the west of the East Ardougne, over the River Dougne.

The 4-story East Ardougne Saradominist church is located in the centre of the region. Of course, there is an altar where players may charge their Prayer points. There is also a priest and Doctor Orbon who is involved with the Sheep Herder quest. Out the front is a mini graveyard and Councillor Halgrive who starts the Sheep Herder quest.

The Flying Horse Inn is one of two bars in the city of Ardougne, the other being The Poison Arrow. It is located in the north-west of the city. They only sell beer and the Heart Stopper during the Alfred Grimhand Barcrawl miniquest. The two NPCs here are the Bartender and the hooded, secretive Lucien. It is involved with some quests.

The home of Lord Handelmort. This is where the totem is in the quest, Tribal Totem. The front door is always locked but players teleport inside during the quest.

Horacio the gardener, is involved in Back to my Roots quest and will take care of player's Jade vine patch unlocked at the end of the quest.

Behind the mansion is a trapdoor leading to a cellar where Jerrod is kept prior to the events of Dishonour among Thieves. During this quest Jerrod is freed and recruited by the player to join Zamorak's team to steal the Stone of Jas from Sliske.

North-east of the marketplace is Wizard Cromperty's house. He can teleport the player to the Rune Essence Mine. He also takes part in helping players get inside Handelmort's Mansion in the quest Tribal Totem. There are a respawning hammer and chisel on a table in his house.

He is also involved in the Back To My Roots and One Small Favour quests.

The Ardougne Domestic Service Agency is based here. The Servants' Guild is the building located in the northeast corner of East Ardougne. They will let players hire a servant for their Player-owned house here for a fee.

The building housing the Ardougne Estate agent is west of the southern bank.

East Ardougne has an extensive sewer system, the Ardougne Sewers, beneath the city. Parts of the sewer system feature in some quests. There are some Monsters, Coal and Iron ore rocks, the Ardougne Rat Pits, and the headquarters of the Hazeel Cult down there. Where Hazeel is recruited during Dishonour among Thieves to join Zamorak's team to steal the Stone of Jas from Sliske.

Near the main north entrance of Ardougne and near the docks of Ardougne is a bank. Here items can be stored to keep them safe when you die, and for being able to carry more.

Players can also find 5 ivy plants on the east side of Ardougne's church. It has been said that this is the fastest woodcutting experience in the game. This spot is also good for banking the bird's nests, as there is a bank a few steps away from the ivy.

Many players choose to train the Thieving skill in Ardougne, some all the way to level 99. In addition to the many stalls Ardougne is home to several chests, and many different types of NPCs that may be pickpocketed. There are a total of 5 chests in Ardougne: a 10gp chest, a 50gp chest, a nature rune with 1gp chest, and 2 paladin chests. The 10gp, 50gp and nature rune chests are in the building south of the road coming from the east entrance to the market-place. The 50gp, and nature rune chests are in the southern most room upstairs, and the 10gp chest is in the room to the north upstairs. The paladin chests are in the locked north and south wings of Ardougne Castle. In the market place there are a total of 8 guards, 2 Knights of Ardougne, and 2 Heroes.

Completing the Ardougne Tasks rewards the player with a thieving cloak that helps them steal from stalls. There is a sign has been added to the area that mentions how many times cakes have been stolen that day.

There are many stores and stalls in East Ardougne nearly as extensive as Varrock.

Aemad's Adventuring Supplies, also known as the East Ardougne General Store, is located just north of the Ardougne Zoo. It is operated by Aemad. This store is unique because it doesn't sell some of the items general stores stock. Items include vials of water, bronze pickaxes, iron hatchets, cooked meat, tinderboxes, balls of wool, bronze arrows, rope, papyrus and knives. Regularly sold items to the shop include shortbows, longbows, arrows and flax. It is not usually a popular general store for selling items.

Zenesha's Platebody Shop is the building south-west of the marketplace. It is operated by Zenesha. She sells plate bodies from bronze to mithril. It is located at the Ardougne Marketplace in the south-west corner.

Ardougne Marketplace is probably the most popular and the biggest stall marketplace in Gielinor. The Ardougne Teleport spell teleports the caster into the centre of the Ardougne Marketplace. With East Ardougne being very wealthy, the marketplace is very popular with thieves, with it often being called the hub or Guild of Thieving. It contains eight market stalls (six with availability to buy from) listed with information below. The owners of the stalls will not buy back their own products for five minutes from the player if they were stealing from their stall. The Ardougne Marketplace may sometimes be seen on the login screen if the option for an animated background is selected.

This is a gem stall in the south-east area of the marketplace. The owner sells the four main gems (sapphires, emeralds, rubies and diamonds). There is no main stock so the default stock is 0. A Thieving level of 75 is required to steal from the gem stall and only uncut gems may be stolen.

There are two bakery stalls in the marketplace; one to the east and one to the west. They both sell the same items but are owned by different owners. They sell bread, cakes, chocolate slices and chocolate bars. A Thieving level of 5 is required to steal from a bakery stall. Players cannot steal chocolate bars from either stall.

There are two silk stalls in the marketplace although you cannot buy silk from either of them, you can only steal it. It is recommended to sell silk here, as the silk merchant can offer a maximum of 60 coins for one piece of silk. However players may not sell them in notes. A player can get a maximum of 1680 coins each load, though they must leave Ardougne after they steal or else he will call the player a "thief" and call the Knights of Ardougne and the market guards to attack. A way to avoid this is to have the vial of stench (a) in your inventory while selling the silk, however, this will not work if you have the vial with you as you steal the silk. A thieving level of 20 is required to steal silk.

To the south-west below the silk stall is the Ardougne Spice Stall. It sells spices, knives and garlic. A Thieving level of 65 is required to steal from the spice stall. A player may only steal spice.

Manor Farm can be found north of East Ardougne. It is the hub for the player-owned farm. It contains a few farming patches. Two wheat fields are located just west of the farm.

The farm well may sometimes have a polar bear agent hiding inside during the weekly Penguin Hide and Seek Distraction and Diversion.

Connected to the northwest section of Manor Farm is the Mill Road Mill. Owned by Milton the Miller, it may be used to produce flour.

This tower is not far from the Tower of Life, which are both south of Ardougne. Invrigar the Necromancer and his assistants live here.

Legends' Guild is located North-East of Ardougne, which is accessible after Legends' Quest. Merchants inside sell various items, including the cape of legends. It is also the place to start Legends' Quest and While Guthix Sleeps.

The Clock Tower is south of Ardougne. There are 4 floors, the fourth one being the basement. During the Clock Tower quest, you have to find 4 cogs in different colour.

The Ranging Guild can only be accessed by players with 40 Range.

The Monastery belongs to a group of monks and is located south of Ardougne Zoo. The quest Monk's Friend can be started there.

The following are started in or near East Ardougne:

The following are involved with East Ardougne:

Retrieved from "https://runescape.fandom.com/wiki/East_Ardougne?oldid=24925054"
Community content is available under CC-BY-SA unless otherwise noted.