Start a Wiki
12
None 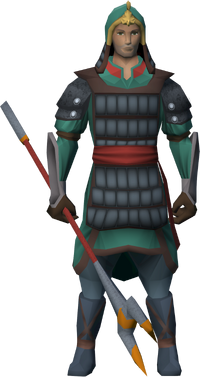 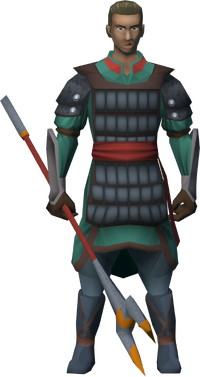 Eastern soldiers are monsters that can be found randomly on Uncharted Isles. They can be killed for combat experience, and will drop a small amount of chimes upon death. Like most human NPCs found on the Uncharted Isles, they are capable of using abilities in combat. While not aggressive, they are very accurate and hit very hard, and are clumped up in usually large groups, making it very dangerous to use area-of-effect attacks and abilities. They only use melee and are vulnerable to binds and stuns, making it safe to kill them from a distance if they are Snared or Entagled, for example.

Attacking Eastern soldiers will scale their life points and combative abilities to the player's own combat level.

They also appear in the Player-owned port opening cutscene, attacking one of the adventurers.

Retrieved from "https://runescape.fandom.com/wiki/Eastern_soldier?oldid=24923391"
Community content is available under CC-BY-SA unless otherwise noted.