Start a Wiki
For the upgraded version, see Attuned ectoplasmator.

If you discard the ectoplasmator, you can get a replacement from Diango in Draynor.

Carrying this and fighting spirits will give you Prayer XP.

An ectoplasmator is a rare drop from a number of ghosts. It was originally a reward from the 2012 Hallowe'en event. It could be bought for 50 ectoplasm while wearing a full set of hallowed robes (from Brother Righteous) or unhallowed robes (from Brother Heinous), requiring at least 4 rounds where all 5 ghosts are found. It was also available as a drop from the ghosts in the 2014 Hallowe'en event, and from the urns in the Til Death Do Us Part.

Occasionally, when trying to pick up a dropped ectoplasmator by hand, the following message may appear:

You try to pick up the ectoplasmator, only to find that your fingers pass right through it.
That's right...it's a GHOST ectoplasmator! Woooooo!

To pick it up use the telegrab spell or have your legendary pet scavenge it. If the item is not picked up before it disappears or it is already obtained and subsequently lost, it can be reclaimed from Diango in the market in Draynor village.

It can be stored in a toy box in a player-owned house. 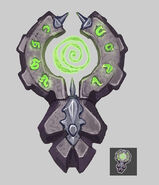 Concept art for the Ectoplasmator.
Click an image to enlarge

Retrieved from "https://runescape.fandom.com/wiki/Ectoplasmator?oldid=24547632"
Community content is available under CC-BY-SA unless otherwise noted.