Under the administration of the Misthalin government 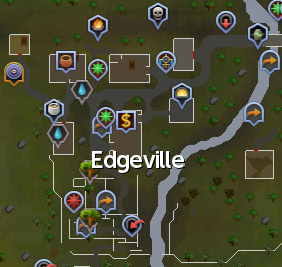 Edgeville, until recently known as the Ghost Town, is a small town located at the border of the Wilderness, west of the Grand Exchange. It is commonly visited for cutting Yew trees, burning logs, and cooking raw fish caught near Barbarian Village, and in members worlds for smelting bars in the Edgeville furnace.

In the early development of RuneScape Classic, Edgeville only had empty buildings. It was originally called Ghost Town on the world map, but when the Wilderness was released it was renamed Edgeville and given a general store and bank.

Before the updates of 10 December 2007, Edgeville was a very popular town for player killers, clans, and free-to-play players who would use the nearby low level Wilderness for duelling, and traders of player killing-related items such as food, various potions, weapons, runes, and other combat-related items. This area was the location of the Mod Hasmo riot, which occurred during the same time as the Pay to Pk Riot.

After the 10 December 2007 update, popularity dropped, although updates such as the Bounty Hunter update and the addition of the Edgeville furnace helped it regain to some of its previous popularity.

Since the Free Trade and the Wilderness update on 1 February 2011, Edgeville has returned to its old popularity. Along with the Grand Exchange, the town received a major graphical update on 9 August 2011.

During the Second Age, the area that is now Edgeville was known as Paddewwa, a mighty fortress of the powerful god Zaros. Found near the Zarosian capital of Senntisten, the area was a great asset to the domain. It could be used in the defence of Senntisten if the capital fell under attack due to the closeness. Following Zaros's defeat at the hands of Zamorak, the God Wars began. Paddewwa would have been razed early before the fall of Senntisten so that the city's defences were weaker.

There are many theories on the location of the Fort ruins and the buildings that are left today. One theory is that sometime after the God Wars people made a village on the ruins, leaving Paddewwa as the dungeon that lies below Edgeville today. Something must have happened as the town was abandoned, and the south of the town was left in ruins.

Another is that the ruins in the south of Edgeville are the ruins of Paddewwa, and that the Fortress had a wall in the north and a large hill defence to the west, with the River Lum and Senntisten to the east. It also had a few buildings in the top half of the fortress. The top half's civilians were apparently massacred, and the Fort itself razed, along with the wall to the north. Also, this theory suggests that Edgeville's dungeon was the dungeon of the Fortress, with many undead Zarosian soldiers (skeletons) roaming its corridors and paths, with the monsters coming in over time.

No matter what happened in the past, thousands of years later, in the Fifth Age, the area was an abandoned area known to many as the "Ghost Town". Only empty homes and ruins could be found. In the Year 169, King Roald of Varrock incorporated the area into the kingdom of Misthalin, naming it Edgeville.

In 169, the three Dragonkin Strisath, Sakirth and Sithaph attacked Edgeville in an attempt to cool their rage and to bring destruction. The trio spat their very powerful dragonfire around the town, burning significant parts of it. The strong warrior Mandrith attempted to help people and saw a glimpse of the assailants, but could not believe his eyes that they were Dragonkin. One of the most damaged houses, aside from the guards' house, is the former house of Lucien, whom Sakirth killed shortly before the attack.

The appearance of the town has been significantly altered as a result of the attack. There are charred scars on the ground of the main pathway leading to the Grand Exchange. Trees, crates and stalls on the pathway are burnt and give smoke. There is also a burnt skeleton right outside the barn. The guards' barracks in the northeast is devastated as a result of fire. The remains inside are still burning in ember. By the sixth year of the Sixth Age, the town has been rebuilt by the World Guardian by the request of Mandrith. 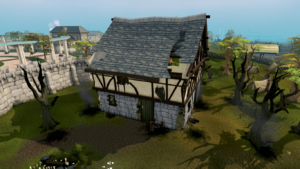 The aftermath of the Dragonkin's attack on Edgeville. 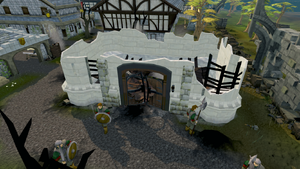 The guard building after the Dragonkin's attack.
Click an image to enlarge

Edgeville only has one bank, which is in the very centre of the town. At peak times, it is just as popular as Varrock's or Falador's banks.

Edgeville's bank is often used by player killers, as it is the nearest bank to the wilderness, and offers an opportunity to prepare, sell food, potions, weapons, and other common combat goods. After the Wilderness update of 10 December 2007, the bank experienced a slight decrease in popularity, but became more populated after the Bounty Hunter update of 6 May 2009. Since 1 February 2011, it has once again become more popular as the Wilderness has become more popular with the return of player killing.

This bank is popular with higher level players who own several amulets of glory as it is currently the quickest bank to get to via a teleport - very slightly better than the glory teleport to Draynor, and about the same as a ring of duelling to Castle Wars bank but without the cost of the ring. It is also very popular for runecrafters because it is the closest bank to the Abyss.

This bank is one of the most popular places to smelt ore due to its close proximity to a furnace. This furnace is made available as a reward for completing Varrock Tasks.

It is also popular in members worlds for Runecrafting, since the Mage of Zamorak who can teleport you to the Abyss is close by.

The bank is often used by players using the special moves of the fruit bat and spirit spider, in order to spawn items to retrieve for profit.

Before the Update:Changes to PvP and Bounty Worlds, and gravestones update there was a table surrounded by a few chairs on the western wall of the bank, but during the update this was changed to a simple bench along the wall. Interestingly, the bankers resemble Grand Exchange clerks.

Edgeville has a general store with two floors. The ground floor has the trader NPCs, while the first floor has a range that can be used for cooking.

The shopkeeper, Oziach, sells Rune platebodies, Blue dragonhide bodies and Mystic robe tops (blue) if the player has completed the Dragon Slayer quest. All of these items are much cheaper on the Grand Exchange than at this shop.

Edgeville has two yew trees just a little south of the bank in a destroyed building. Because of the trees being closer than other yew trees to the bank, many players like to cut these trees. This area is also used for clue scrolls which contain a specific cryptic clue.

There is also a willow tree east of the bank which is not so popular, but is very useful for woodcutting training.

Next to the willow tree is a patch of ten normal trees, which are popular for low level fletching training.

Edgeville has a dungeon entrance right beside the yew trees in the destroyed building. It is an underground dungeon and is home to a variety of monsters, including skeletons, hobgoblins, zombies, and Hill giants. The giants' lair had been expanded by Jagex several times over the years. It is often full of players fighting hill giants because of the giants' drops, which include big bones. Low level players are often advised to stay away from this dungeon.

There is also a medium-sized mine at the centre of the dungeon and it is guarded by level 22 and 25 skeletons, bothering mid and low level players. This mine contains adamantite ore, mithril ore, silver ore, coal and iron ore.

For members, there is a part of the dungeon that is actually in the wilderness. In this part you can find chaos druids, earth warriors, black demons, lots of red spider egg respawns, and the demon Chronozon for the Family Crest quest.

In this dungeon you can also find the Slayer master Vannaka.

At the far east side of the dungeon, there is an Agility shortcut that leads to the Varrock sewers.

In the 5 February 2008 update, the Edgeville dungeons were updated and their graphics were improved.

The Stronghold of Player Safety was added on 11 March 2008, providing both free players and members a new dungeon similar to the Stronghold of Security, which is located only a short distance south from it.

The Portal to Soul Wars Island is located west of the yew trees and South-west of the bank.

Edgeville has a range and a stove, which are basically the same thing. The range is on the second floor of the general store and the stove is in the small house west of the bank. The stove is very close to the bank, so it is a great place to withdraw food, cook it on the stove, deposit it in the bank, and repeat. 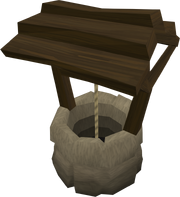 Players can obtain water from a well with a bucket west of the bank or from a sink in Evil Dave's (mother's) house west of the bank. The well is nearer to a bank than any other water source available to non-members.

Players used to be able to fight the guards at this jail. The jail was made inaccessible during Edgeville's graphical update on 9 August 2011. The iron mace now spawns outside. The jail building is destroyed by the Dragonkin during the epilogue of Ritual of the Mahjarrat.

Leather gloves spawn just outside the bank, once picked up a new pair will appear (approx) every 15 minutes.

There was a furnace added in the 10 September 2007 update. Prior to its expansion, movement, and door removal to use this furnace required at least Varrock armour 1 to be worn, but after that update the armour is not needed for use, wearing the Varrock armours only gives the bonus smelting chance. However, you still need to have completed at least the easy set of the Varrock diary. In the same room at the furnace is an NPC named Jeffery. This furnace can only be used on a members server. Even if you completed the tasks, the furnace is unusable in free worlds.

A player can inspect the furnace to receive Froggi, the smithy's apprentice.

A small obelisk for recharging Summoning points lies to the North-east, by the bridge.

After completion of the All Fired Up quest, members can light a beacon on the edge of the Wilderness wall, as long as they have level 62 Firemaking.

With the 16 June 2009 update, there is a new teleport switch leading to the high-level Wilderness from the ruined building south of the bank. The Edgeville lever is one-way only and goes to same destination as the Ardougne lever: the Deserted Keep in level 56. Bring a sharp object, such as a Knife (the one on the tool belt will work), to cut through the web to get out of the Deserted Keep. Be aware that is a risk of running into PKers. Note that if you pulled the lever from Edgeville and pull back the lever again, you will end up at the Ardougne lever. This can thus be used as an one-way Edgeville to Ardougne teleport.

With the 9 October 2012 update, a pair of Artefacts were added in Edgeville and the King Black Dragon's Lair. Activating the artefact in Edgeville will transport the player to the KBD lair.

Retrieved from "https://runescape.fandom.com/wiki/Edgeville?oldid=24922362"
Community content is available under CC-BY-SA unless otherwise noted.