Start a Wiki
CSOS
For other uses, see Edmond (disambiguation). 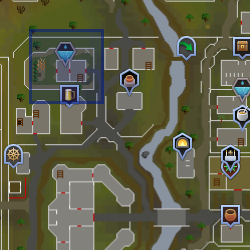 Edmond is a civilian of East Ardougne, the husband of Alrena and the father of Elena. He is friends with Jethick, though the pair haven't seen one another since before Elena's birth.[1] He lives north of the Flying Horse Inn.

When West Ardougne was quarantined, Elena snuck into the city to help, intending to only be gone a few days. When three weeks passed, Edmond made plans to sneak into the city himself to rescue her.[2][3] However, he was too old to go himself.[3] A passing adventurer offered to take his place and he showed them to the Ardougne Sewers, which he'd gotten access to by digging down through his garden. His wife gave the adventurer a gas mask to protect them from the plague. Their work aroused the suspicion of the mourners, though they were seemingly unable to act against Edmond.[4]

The adventurer managed to enter West Ardougne and freed Elena, who was being held captive by the mourners for her work on the plague. She returned home mere minutes before the adventurer returned to inform Edmond of their success. He left the garden entrance to the sewers open afterwards.

He is an answer for the anagram clue scroll "NOD MED". He gives a challenge scroll asking how many pigeons are behind Jerico's house. The answer is 3.

Retrieved from "https://runescape.fandom.com/wiki/Edmond?oldid=24921997"
Community content is available under CC-BY-SA unless otherwise noted.