Ready to help you. 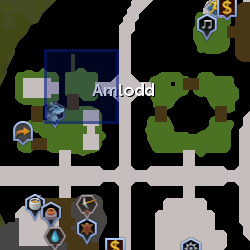 Eilwynn Amlodd is an elf found in the Amlodd clan district of Prifddinas. She is a member of the Amlodd Clan. After completion of the hard Tirannwn tasks, players may turn in Divination chronicle fragments to her for the same rate of experience May Stormbrewer gives. The rate of experience is 75% of that given at the shrine of Guthix, so players who have completed The World Wakes should not turn in their chronicle fragments here.

A 'chronicle cash-in NPC' who '[a]cts identically to the World Wakes cash-in point' was planned during the first of the Prifddinas design documents to appear in the Tower of Voices. However, in the first of the forum posts regarding changes to the design documents based on player feedback, it was said that the character would be removed. Having Eilwynn grant only 75% of the chronicle fragment Divination experience is likely the result of player complaints of devaluing the reward from The World Wakes after the first document was released.

Retrieved from "https://runescape.fandom.com/wiki/Eilwynn?oldid=24921046"
Community content is available under CC-BY-SA unless otherwise noted.