The Elder Gods, also known as the Creators[2], are legendary and divine entities responsible for creating the planets and life in the universe. They occupy the highest tier of godhood. There are five of form[3]: Jas, Ful, Wen, Bik, and Mah. Jas is the oldest[4] while Mah is the youngest.[5] According to Zaros, there is also a sixth, which he describes as not being of form, but rather "something else".[6]

Jas is the creator of most Elder Artefacts (except for the Elder Kiln, and possibly others), which she did using the Catalyst, more commonly known as Stone of Jas.[7] They used the Elder Artefacts to better shape their creations in their quest to create a "perfect" world, which was fulfilled with the making of Gielinor, their final creation. Afterward, the Elder Gods seemingly vanished, abandoning their artefacts across Gielinor.[8].

In actuality, they still reside on Gielinor, and rest beneath the locations where the elder chronicles are found, next to their mouthpieces.[4] Jas is under the Kharidian Desert, Ful is under Karamja Volcano, Bik is under Entrana, and Wen is under Ice Mountain and White Wolf Mountain. An empty fifth mouthpiece chamber is found beneath Lumbridge. Azzanadra dismisses the possibility that this chamber is for Mah, and speculates it is for something else which he chooses not to reveal.[9]

While the Elder Gods were known to the early human settlers of Gielinor, little knowledge of them has survived to the present day, and outside the Gods, Dragonkin, TokHaar and Mahjarrat, most know nothing of them. The Elder Gods are spoken of by TokHaar-Hok; they are the "masters" that created the TokHaar using the Elder Kiln to create and shape the mountains of the world. He says that they are not Gods as the player thinks of them, but far more powerful. The player's Gods are corporeal beings who abused the masters' artefacts to gain power, and in his opinion don't deserve worship. The TokHaar await the return of their masters.

In addition there is also hidden lore about the Elder Gods from the point of view of the TzHaar. This lore is found in a bookcase next to the Fight Cauldron, and can be translated with the aid of TzHaar-Ga'al-Kot.

The origins of the Elder Gods are unknown, whether they hatched from eggs at the start of time or were created by something else. It was stated that the Elder Gods were immortal, however during the Fate of the Gods quest, Zaros tells that there were more than five Elder Gods, but because of their inexperience of creating a planet with sufficient Anima, they were dying when they hatched from their egg forms because there was not enough to replenish them all. Mod Osborne, however, says that the Elder Gods had always numbered five, and that this cycle was the first where they encountered their own mortality. Mah's absence caused Jas to create the Catalyst, along with the other artefacts, in order to duplicate Mah's power.[10]

Zaros is stabbed by the Staff of Armadyl, one of the most powerful of the elder artefacts.

The Dragonkin, a powerful race from a previous cycle of the universe and the dangerous defence mechanism of the Stone of Jas. 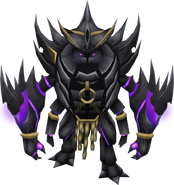 The Tokhaar, a race created by the Elder Gods, were tasked to create mountains and shape the worlds.