Start a Wiki
For other uses, see Elena (disambiguation).

She's mastered the many skills of RuneScape. 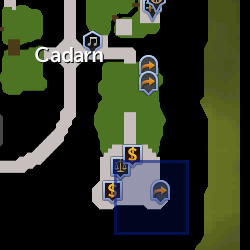 Elen Anterth is an elf who resides in the garden of the Max Guild, in the Cadarn Clan district of Prifddinas, or inside the guild itself (next to the combat portal) once a player has earned a max cape. Her surname is Anterth, yet her family belongs to Clan Cadarn. Every few seconds her cape will change to a different cape of Accomplishment and she will perform the corresponding emote.

She will also give players their rewards for completion of the elite Tirannwn Tasks.

She is a counterpart to Max in Varrock, who also sells the Max cape. Unlike Max, Elen's given name is not a play on words of her being maxed in skill levels. When asked why her name is not 'Maxine', she replies that would be a strange name for an elf, and that she likes the name, but that her actual name is Elen Anterth and her family belongs to Clan Cadarn.

When asked how she became so highly skilled so quickly when Prifddinas has been only recently regrown, she explains that she has travelled all over, as she and her family travelled east with the Cadarn Clan during the reign of King Baxtorian. She was young at the time, she said, yet she learned a lot, and that knowledge stuck with her. With that, she developed quickly to become highly proficient in all skills.

Elen explains her dislike of Max when asked if she knows him. She says that he does come to Prifddinas on occasion, after the city is regrown, but he does not stay for long. She points out that he has been unfriendly when she has tried to talk to him, claiming that he doesn't have time to stop and chat because he is too busy skilling. She complains that he just rushes from place to place training, without stopping and taking the time to relax and enjoy, and to properly appreciate all that her elven city has to offer. When asked if Max ever stops by the Max Guild, she says that he claims there would be no gain for him there, and that it would be a waste. Because of this, Elen has told him that he is not welcome in the Max Guild.

Chatting with her provides an option to toggle the max cape teleport between the garden and within the tower.

Upon the release of Invention on 25 January 2016, Elen lost her max cape and was teleported outside to the garden, as she was still yet to train Invention to max skill level. When asked what happened to her max cape, Elen responded that she was still training Invention to max level, which would be required for her to be able to wear the cape again. She appeared to be taking a relatively relaxed approach to skill training, stating that there is no need to rush ahead to max level so quickly. She offered encouragement to the player, stating that the player would probably reach max level for Invention even before she does, to which the player responded with uncertainty. At this, Elen reminded the player that there's no need to rush, as the path to max level should be about the journey, and not simply the destination. Elen regained her cape on 16 May 2016.

Upon the player wearing the max cape again after reaching 99 Invention, she teleports back inside the guild and again offers the option to toggle the max cape's teleport destination.

Retrieved from "https://runescape.fandom.com/wiki/Elen_Anterth?oldid=24565167"
Community content is available under CC-BY-SA unless otherwise noted.