• She looks concerned.
• She looks upset.
• She doesn't look too happy. 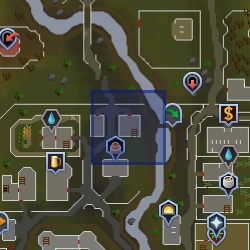 Elena is an Ardougnese woman who voluntarily went to West Ardougne to try to help the people there and research the plague. She is intelligent and has some knowledge in (bio)chemistry and epidemiology, being a healer by profession.

Elena's house is rather small and can be found north-east of Ardougne Castle, near that of her parents', Alrena and Edmond.

The following takes place during Plague City and Biohazard.

In 169 of the Fifth Age, Elena managed to sneak into the heavily fortified West Ardougne, eager to help its population deal with the plague.[1] In addition to carrying out research on the plague, she took care of the plague victims while staying with the Rehnison family.[2] While she was returning home with a couple of samples, however, the mourners kidnapped her and locked her in an underground prison cell.[3][4]

A few days later, Elena's father Edmond enlisted the help of an adventurer to find out what had happened to his daughter, since he had not heard from her for a while. After getting into the city, Edmond's friend Jethick redirected them to the Rehnisons, whose daughter Milli told them she had seen Elena being abducted. The mourners on guard would not allow them into the house though, on the grounds that it had been infected.[5] The adventurer succeeded in convincing city warder Bravek, who recognised Elena's efforts to help the people, to provide them with a warrant, and quickly entered the house while the guards were discussing what to do with it.[6] Glad to be free, Elena returned home.

Afterwards, the adventurer retrieved Elena's confiscated distillator from the mourners' headquarters by poisoning their stew and posing as a doctor. She performed some tests using liquid honey, ethenea, sulphuric broline and touch paper, but was surprised to see nothing happened.[7] She asked them to take the samples to her old mentor Guidor in Varrock, who got the same results and concluded that there is no plague at all.[8] Upon hearing this, Elena began to suspect something larger going on and advised the adventurer to confront King Lathas himself. The king admitted that the plague was fake, but told them that he had created the hoax to protect his people from his brother King Tyras, who, he said, had been corrupted by a Dark Lord.[9]

The following takes place during Mourning's End Part I.

Much later, her friend the adventurer visited her once again, albeit disguised as a mourner. Initially startled, she quickly let them into her house. They asked her for advice on how to make a poison from rotten apples, stating that they had used one to poison the mourner's stew before, from which she concluded that a mould rather than the apple itself was most likely responsible. They told her that they needed the toxic to poison the West Ardougne food supply in order to gain the head mourner's trust, which she found an appalling endeavour. However, they attempted to convince her by stating that a fate much worse would await the city otherwise, to which she asked for more explanation.

They recounted how King Lathas admitted the plague was fake and ordered them to get rid of Lord Iban to clear the Underground Pass and restore the Well of Voyage, after which they were tricked into assassinating King Tyras, unaware that Lathas and Iorwerth were working together to return the Dark Lord to RuneScape, and how the rebel elf Arianwyn revealed the truth to them and tasked them with infiltrating the ranks of the mourners.

Elena agreed to help them make the poison and asked for a sample of the rotten apple. After some testing, she discovered that one of the byproduct's of the mould on the apple was indeed a toxic substance, albeit not lethal. She instructed them to mash up a load of apples, dissolve them using a flammable solvent with a low evaporation point, which the adventurer figured out to be naphtha, strain the solution, heat the remaining liquid to evaporate off the solvent, then use the resulting toxic powder to poison the food supplies. She then provided them with a sieve and advised them to check the apple orchard north of the city, which had been affected by a blight.

The adventurer successfully did this and managed to find out the mourners' plans, although they have not informed Elena yet.

By year 1 of the sixth age, the adventurer is ready to overthrow the Mourners of Ardougne, along with Lord Iorwerth and King Lathas, in cooperation with Arianwyn, the elven clan leaders, and the rebel elves of Lletya. Bravek suggests that Elena would be influential enough to help in overthrowing the Mourners. When the adventurer goes to speak to her, it takes little effort to get her assistance.

After the revolution, she expresses a wish to focus on her studies as well as to travel to Prifddinas to learn more about the elven understanding of science, believing it to be different from that of Humans.

Retrieved from "https://runescape.fandom.com/wiki/Elena?oldid=22962185"
Community content is available under CC-BY-SA unless otherwise noted.