View source
watch 02:56
Raise a Floppa - The Loop
Do you like this video?
Play Sound
OSWP
This article is about the race. For other elves, see Elf (disambiguation).

Elves are among the longest lived of all the races of the universe. They are noted as being tall, graceful humanoids, with elongated ears. Female elves are also renowned for their beauty. They follow the crystalline goddess Seren, who journeyed to Gielinor with them from their ancestral homeland Tarddiad. Elves have no need for human technology or magic, but instead opt for crystal-based weaponry, technology and magic power, granted by Seren. Due to their many years of isolation brought on by their beliefs and a civil war, elves are generally regarded as a mere myth by humans, most of whom have not interacted with elves in centuries and believe them to have gone. All elves are associated with a clan, each of which originated from the first eight elven families of Gielinor.

The kingdom of Tirannwn contains the largest proportion of the elven population. It is scarcely populated with the exception of Prifddinas, the capital of the region.

West Ardougne was under de facto control of elves from the Iorwerth clan, who controlled the population by spreading false rumours of a deadly plague with the consent of King Lathas. They posed as mourners, taking "plague victims" from their homes, supposedly to care for them as they die, but instead using them as slaves in the tunnels under the city. This ended with a internal revolution, in which the mourners were evicted from the city in place of Knights of Ardougne.

Some elves belonging to Clan Cywir remained on Tarddiad following the departure of Seren and the remaining elves from the planet to Gielinor during the First Age. With an insatiable thirst to be in the presence of their deity, Seren, the elves on Tarddiad became insane, implanting themselves with native crystals from the planet. These crystals drew into their own beings small sections of Seren's essence, which they hoped would resolve their sickness to be within Seren's presence, but instead turned them into Crystal Shapeshifters. Elven society on the planet has mostly collapsed into a state of anarchy.

The elves worship a deity called Seren, who communes with them via crystal seeds, which are also utilised by the elves to create buildings and tools. Seren first encountered the elves on Tarddiad, their homeworld, after leaving her creator, Mah, on Freneskae. Upon arriving, Seren found that Mah had instilled the ability to make mortal races, namely the elves, love her by merely being in their presence, an ability she shares with her "brother", Zaros. After the elven Ceidwad died of old age Seren became greatly saddened. She attempted to expand the lives of the elves via the Song of Creation yet in doing so she inexplicably tied them to her, giving them a dependency to be in her presence. If away from her for too long the elves would become ill and feverish, eventually dying. Seren was responsible for bringing the elves with her to Gielinor after meeting Guthix on Tardiadd. Her time on Gielinor was largely occupied by her desire to "cure" the elves from their dependency upon her, believing that they should be free to live outside of her influence - she intended to depart from Gielinor by the end of the God Wars.

Seren is a pacifist goddess who believes in isolationism so to achieve her goal of peace and growth - views which she shares with Guthix, the god of balance. As a result of this, the elves became separated from the rest of Gielinor as the God Wars erupted: Seren established a barrier to surround Tirannwn by attuning the anima allowing the elves to remain largely unaffected by the wider conflicts effecting Gielinor, however, Seren allowed elves who wished to fight in the God Wars to leave Tirannwn. When Guthix returned to expel the warring gods, he visited Seren last. Seren refused to leave the elves, admitting to Guthix that doing so would leave the elves to die. Accepting her fate, and Guthix's will, Seren shattered herself into shards of crystal as a means of breaking the elves dependency upon her: she believed that by crafting the remnants of her body into tools, the elves would eventually be weaned off their dependency upon her and free to reveal themselves to the rest of the world - yet would remain in her presence, preventing their death.

She is widely accepted as goddess of the elves, however, in the Fourth Age a group of elves distinguished themselves from the rest of the elves and began to worship a god known as the 'Dark Lord'. This was brought on by a series of rituals and magics developed by Seren and the Iorwerth to break the elves "curse" in the Third Age: however, the Iowerth developed an attachment to the 'darker' side of Seren as a result of said rituals: Seren aborted the tests immediately. She later expelled a shard of her being containing said dark thoughts away from the elven lands, this shard was attracted to the death energies that lay around the Death Altar which blocked it's emotion, thus creating the Dark Lord. Before doing so, she warned the clan elders of the dangers which the Dark Lord posed, leading to the creation of the Temple of Light which isolated the Dark Lord within the Underground Pass. Despite this, the Iorwerth's attachment to the Dark Lord resulted in a schism in elven society, leading to the break out of the elven civil war. The remaining elven clans remained loyal to Seren.

The elvish language, on the other hand, is far more complex, for their tongues are as agile as their minds, and twice as bewildering. The nearest approximations I can make are as follows:

Lletya = *Ch*let-uh-ah (the '*ch*' indicates a slight rolling of the sound at the base of the tongue, as if you were to attempt to clear your throat quietly and politely)

Isafdar = Iss-av-daarr (in which the 'I' is pronounced like the 'i' in 'thin', and the 'r' is rolled quaintly)

In general, however, I merely pronounce 'Lletya' as 'Let-ya', and 'Isafdar' as 'Iss-aff-daar', but one should always be aware of other cultures - if only to know when you've angered someone enough to make them contemplate running you through with a large and unpleasantly bladed implement!

Elvish is generally represented in-game by the Welsh language, including Elvish personal names (although there are several important exceptions: the names of Baxtorian, Glarial and Merethiel and her brothers are not Welsh): for example, Seren is Welsh for "star", and Prifddinas means "capital city".

Some words of the elvish vocabulary, such as Merethiel and Eredthor are based on the Elvish constructed language Sindarin, created by J.R.R. Tolkien on his Lord of the Rings universe.

Elves are one of the 'races' who have champions of champions in the Champions' Challenge Distraction and Diversion. It is not currently possible to fight the elf champion.

Some elves in Lletya can be pickpocketed at 85 Thieving, giving 353.3 experience per successful attempt, with chances of double loot available at 95 Thieving and 85 Agility. Elves are one source of high-level Farming seeds. These are not recommended as a training method due to the high failure rate, however failures can be substantially mitigated with the use of multiple buffs. At 85 Thieving a player using the Trahaearn exoskeleton set, Crystal Mask, Light Form, and the Ardougne Cloak 3 can expect approximately 250,000 experience per hour. If thieving from elves, it is suggested to use Goreu due to his proximity to the bank where rapid healing is possible.

Pickpocketing these 70 times is a possible Daily challenge. 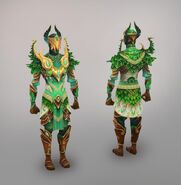 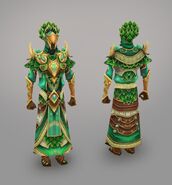 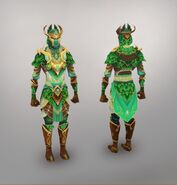