A contract for an elf squad.

The Elf squad (light) is an item used in Mobilising Armies. When used during a game, it will become a squad of elves. It uses magic, which means it is weak against Goblin squads and dominant over Dwarf squads. It has a combat level of 324, 4,800 life points, and level 60 discipline, but it moves at twice the speed of heavy elf squads. The elves in the Elf squad (light) wear lavender robes and wield different elemental staves, and find logs and white berries while exploring. If it dies during a game, the item will become an Elf squad (light) (defeated). 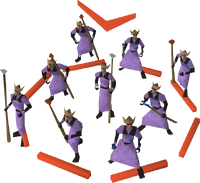