? (edit)I don't wanna be at the wrong end of that pike.He looks pretty handy with that bow.? (edit) 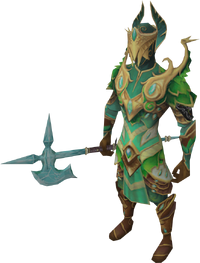 Elf warrior can be found in Lletya and parts of Tirannwn. Those in Lletya are part of Cadarn Clan, while those in the Elf Camp are part of Iorwerth Clan. They are featured heavily during Regicide and subsequent quests. They were also seen in the Gnomecopter Tours for free players. The warriors in Lletya drop crystal teleport seeds which are useful for teleporting around Tirannwn and can be disassembled for faceted components once charged.

Killing the elves in Lletya (this requires Mournings End Part 1 to be started) is more convenient than killing those in the Elf Camp as there is a nearby bank and altar, which is upstairs in the house where Arianwyn is located. However, only the elves in the Elf Camp drop charms. After completing Deadliest Catch a deposit chest is available south of the camp. Fishing spots and rabbits are nearby for replenishing food.

Elves live far longer than humans, and those that choose a military life have decades to hone skills that humans must train in months. As a result, elf warriors are among the most dangerous defenders of any town or city in RuneScape. They wield vicious pikes and crystal bows, but are weaker in the face of stabbing attacks.

An altar on the first floor. The ladder is located north of the bank.

The ranged elves are weak to crush attacks, so godswords, chaotic mauls or drygore maces work well against them.

Some lower levelled players maybe find that the safest method is to use range or mage and use the fences and benches as safe spots. Be reminded that the elf warriors with halberds have the ability to attack over obstacles if you stand too close.

An alternative location for this slayer task is the Elf Camp. This area has a fireplace as well as a fly fishing spot. Players can ultimately kill the elves there and stock up on their food supply by simply fishing. The elves do not drop teleport crystals here.

A gem bag bought with dungeoneering tokens may be useful as they drop gems frequently.

For players wishing to complete this task without concern for any drops, the fastest method would be through Heart of Gielinor. The Seren warriors, Seren mages, Seren archers are all elves. It is best to go to either the area between Zaros and Seren or the area between Sliske and Seren with area-of-effect abilities and simply kill the occupants as they fight between themselves.

With a bonecrusher and twisted bird necklace, split dragontooth necklace or demon horn necklace, there would be no need for prayer potions. The attacks do stack up and it may be pertinent to bring food. Ideally, one can get a bounty from the Feng, the Bounty Master and if it is either Seren, Sliske, or Zaros, it is possible to complete both the bounty and the slayer assignment concurrently.