Just the man to talk to if you want to know about pigs. 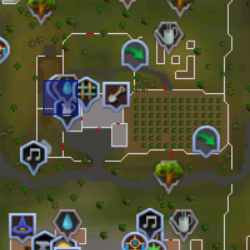 Eli Bacon is a pig farmer who discovered how to make bacon from the meat of pigs. He is a bachelor who comes from a family of famous pig wrestlers.[1] He, along with Martin the Master Gardener, are the only two farmers who keep pigs any more, due to a decline in the sport of pig wrestling in favour of activities such as Castle Wars,[2] as he inherited his pigs[1] while Martin keeps his around for the tourist money generated by Pigzilla.[2]

He was preparing Gassy Steve, one of his wrestling pigs, for his next competition when the pig went up in flames.[3] The smell of cooked pig attracted people who wanted to see how the meat tasted. When Eli tried it himself, he found it to be delicious and decided to try marketing it.[4] He then registered the food with the Cooks' Guild, making a deal with Chef Morrisane in exchange for 30% of all future earnings,[5] naming it after himself. Meanwhile, the popularity of the food accidentally caused the locals who tasted it to become addicted.[6] Bacon addicts would mindlessly storm his farm, trying to eat his pigs and threatening the pigs with extinction.

Eli tried to reverse the trend of pig decline by hiring an adventurer to promote and encourage pig farming by showing how pigs could be useful, but before they could fully discuss their plan the farm was attacked. Eli herded his pigs to safety while the adventurer made some decoy pigs to distract the addicts. The adventurer got a pig from Martin and they decided on how to make pigs attractive again, building a machine for training. However, before they could put their plan into action, they needed to clear the farm. Eli had the adventurer drug the addicts with "sleeping potion" (really poison P++++), and the addicts disappeared completely shortly afterwards. They trained the pig up and then showed it off in several cities, creating a demand for pigs, much to Eli and Martin's delight.

It's hinted that Eli constantly murders people and disposes of the bodies around his farm. He states that he broke his hammer on a hiker;[7] he disguised a very potent poison as a sleeping potion[8] then claimed the addicts had been removed by freakish weather and that the pig had been getting a lot of exercise,[9] implying he fed the addicts to the pig; buries body parts and possessions under his farm, claiming they'd been left there and that he didn't want the place looking untidy[10]; and it's suggested that the disturbingly man-like scarecrows in the cabbage patch wear victims' clothes.[1] This has lead to several occasions where he was questioned by local authorities, but he has always denied the claims.

If a pig pet is lost, it can be reclaimed from Eli in his cellar. Additionally, he can be spoken to after Bringing Home the Bacon to receive a weekly dose of raw bacon or pouches for the pig Summoning familiars.

Players are advised to claim the familiar reward as raw bacon has very little practical purpose and sells poorly on the Grand Exchange while the respective familiars can provide more use, especially the Spirit prayer pig which is one of the few familiars that restore Prayer points.

Retrieved from "https://runescape.fandom.com/wiki/Eli?oldid=24564908"
Community content is available under CC-BY-SA unless otherwise noted.