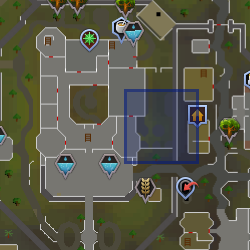 Queen Ellamaria Remanis is the Queen of Misthalin, ruling alongside her husband, King Roald Remanis III in the capital city of Varrock. Players may start the Garden of Tranquility quest by speaking with her, in which players must find rare seeds, plants, and other decorative items for her garden. According to the Wise Old Man in Draynor Village, before becoming a queen, Ellamaria was once a peasant, working as a barmaid in the Blue Moon Inn in southern Varrock, and not related to any royalty what-so-ever. King Roald seems to be extremely afraid of her because of her short temper. She is admired even at the Kingdom of Asgarnia, the empire having a statue in the Warriors' Guild in her honour.

Queen Ellamaria is not mentioned in the Varrock Census, written in year 160 of the Fifth Age. It may be that Ellamaria was not living in Varrock at the time of its writing, or it could be a mistake/omission by Jagex. Despite her humble beginnings, Ellamaria now looks down on all commoners and adventurers, acting very haughty. She appears in the vision at the Sacred Forge in Camdozaal, during the Defender of Varrock quest, and later on a line of five Varrockian guards are seen protecting her from the zombie invasion during the Battle of Varrock Castle.

During the novel Return to Canifis, she appeared to Squire Theodore several times, harassing him about him letting the Society of Owls cover up the murders of the Wyrd. Eventually, at the Midsummer's Eve Festival, Theodore recognised her, dressed in attire outside her class, approaching the King, whereby he ordered her to be detained, believing her to be a threat. When the King held parliament with the people to discuss the recent Wyrd attacks, she was brought forward as a representative of the people of Varrock due to her peasant status. Eventually, after Ebenezer fell ill to the Wyrd attack, she was set free, and sometimes tended to Ebenezer whilst he slept. During these times, King Roald often visited to check on Ebenezer's condition, although many suspected it was purely to see Ellamaria.

Retrieved from "https://runescape.fandom.com/wiki/Ellamaria?oldid=21088163"
Community content is available under CC-BY-SA unless otherwise noted.