Armed with a pair of needles. 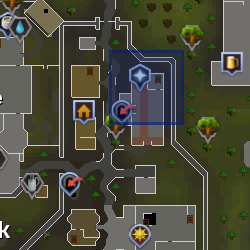 Upstairs in the East Varrock church

Elsie Parks is an old woman knitting an article of clothing for Father Lawrence upstairs in the Saradomin church in north-east Varrock.

If you bring her a cup of tea, she will tell you a story of Dissy and some misfit followers of Saradomin who went down to the Zamorak temple (in south-east Varrock) and painted "Saradomin pwns" on the wall. The Dissy she refers to is in fact the Wise Old Man of Draynor Village, whose true name is Dionysius. Doing so is an Easy Varrock achievement.

After the Wilderness and Free trade update on 1 February 2011 when you ask her how to make money she will answer that you can get in the Wilderness and go kill other people. She says that this is not a good thing to do, and that you should learn a trade instead, such as Smithing or Cooking.

Iffie Nitter in Thessalia's Fine Clothes in Varrock is the sister of Elsie. Elsie is or was married to Fred "Freddie" Parks, according to the Varrock census of year 160 of the fifth age. Thessalia Nitter is presumed to be either Iffie's or Elsie's daughter.

Retrieved from "https://runescape.fandom.com/wiki/Elsie?oldid=24562613"
Community content is available under CC-BY-SA unless otherwise noted.