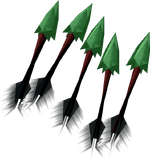 Enchanted emerald bakriminel bolts have a 55% chance of triggering the Magical Poison effect, which poisons the target for 4% of the player's weapon damage. This effect does not stack with weapon poison but it does stack with Cinderbane gloves.

This effect can be triggered with auto attacks and abilities. Abilities will only consume bolts in PvP. Multi-target abilities such as ricochet can trigger the effect separately on secondary targets. Abilities that hit multiple times such as rapid fire have a chance to trigger it on each hit separately.

The chance of the special attack occurring is increased to 57% upon the completion of the elite Seers' Village achievements.

Retrieved from "https://runescape.fandom.com/wiki/Emerald_bakriminel_bolts_(e)?oldid=24561082"
Community content is available under CC-BY-SA unless otherwise noted.