The emerald golem outfit is a Mining outfit that can be acquired via Treasure Hunter, or made via the Invention skill. The outfit pieces can each be made at Level 80 Mining and Level 20 Invention by combining 3,600 gemstone golem fragments at an Inventor's workbench, after discovering the Magic golem outfit blueprint at the workbench. 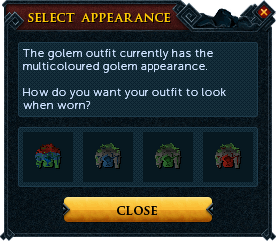 The golem outfits were originally available only via Treasure Hunter, in a time-limited promotion that ran from 19 June to 23 June 2014.

They were later made available again by purchase from Vic's Store, on the release of the store on 29 September 2014, for a 500 credits per outfit piece. The outfits have also returned in Vic's store on every subsequent re-opening of the store (the store itself only ever appearing in-game on a temporary basis).

On 20 August 2015, the outfits were re-added to Treasure Hunter permanently, and later an update on 14 November 2016 added the ability to make the outfits by collecting and combining gemstone golem fragments.

Retrieved from "https://runescape.fandom.com/wiki/Emerald_golem_outfit?oldid=20904468"
Community content is available under CC-BY-SA unless otherwise noted.