The Emerald golem outfit is a Mining outfit that was acquired via Treasure Hunter, and was later purchasable from Vic the trader.

Players could at one point obtain the outfit as well as its emerald and ruby counterparts from Vic the Trader in Burthorpe. Each piece cost 500 credits. Note that 500 credits equals to 6 Large Prismatic Stars, or 4 Large Prismatic Lamps, so by purchasing the full outfit, you would have missed out on up to 1,250,000 bonus experience. 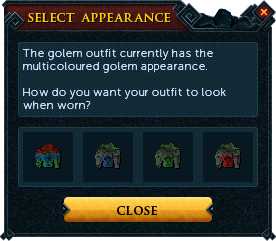 Retrieved from "https://runescape.fandom.com/wiki/Emerald_golem_outfit?oldid=17829403"
Community content is available under CC-BY-SA unless otherwise noted.