Yes (No in the Celebration of Fire) 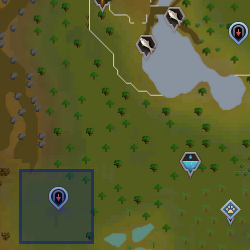 Emmett Logowski is one of the roaming firemakers involved in the quest The Firemaker's Curse. He is a former Circus performer, but left after an incident, though he hopes to return.[1][2] He wants to learn how to gain greater control over fire and becomes its master.[3][4] He has a habit of self-combustion when he gets excited. Despite his obsession with fire, he's considered to be relatively harmless.[5]

During the quest, he is possessed by Char and forced to kill Phoenix, a fellow firemaker. He becomes paranoid and wracked with guilt, thinking he's being accused when asked about his suspicions.[6][7] The only time when he does not react as such when asked who is being possessed is when he's possessed a second time. After the quest, he goes to request that he be allowed to rejoin the circus, and the survivors decide to help him.[8] Afterwards, he can be found running the flaming poi section at the circus. He has a flaming poi performance named after him, the Big E.

He also features in the Celebration of Fire in the Lumbridge Crater, along with his fire dancers; Poi Dancers, and Fire Breathers. He hands out fire poi.

Emmett gets so excited he goes up in flames

Retrieved from "https://runescape.fandom.com/wiki/Emmett?oldid=24564624"
Community content is available under CC-BY-SA unless otherwise noted.
... more about "Emmett"
RDF feed
Is members only
Yes (No in the Celebration of Fire) +
Store location
Post quest: Balthazar Beauregard's Big Top Bonanza +