Enlightened Journey is a quest in which you help the Entrana monk Auguste set up a hot air balloon transportation system.

On the peaceful island of Entrana, a lone monk has tired of his life of simplicity and quiet reflection. Auguste wants to boldly write his name in the history books; to craftily defeat the laws of physics; to miraculously sail through the air...preferably not to horribly explode into a ball of flaming death.

Of course, to do all this he'll need the help of a worldly adventurer: are you bold enough to merrily laugh in the face of the unknown?

To start the quest, player should travel to Entrana and speak to Auguste, who is on the west side of the island, just north of Frincos's Fabulous Herb Store.

Auguste requires about two dozen items to make two test balloons. To save time, gather these items before starting the quest. Most can be bought from the Grand Exchange. He requires 3 papyrus, 10 silk, a sack of potatoes, a ball of wool, 8 sacks, a candle or black candle, a bowl, yellow dye, and red dye in total. You can give the items to Auguste before they are needed.

Upon first arriving in Entrana, head to the farm north-west of the ship and pick 10 potatoes, and use them to fill up an empty sack to get a sack of potatoes.

After collecting all the materials, talk to Auguste, who intends to be the first balloonist in all of RuneScape and needs an assistant. He will tell you that he needs to perform two test runs.

Talk to Auguste to see a short cut-scene of the balloon launch. After that, talk to him again and he will take the remaining two pieces of papyrus and the sack of potatoes from you. In a second cutscene you launch the next balloon, which is attacked and set on fire by a mob of angry peasants.

After the tests, talk with Auguste, who will require players to gather the materials for a real balloon. Auguste will give the player a basket of apples and a sapling, a willow tree. The willow branches do not need to be cut from a willow tree grown from the sapling he gives you.

Fill the empty sacks at the sandpit just south-east of Auguste, to make sandbags. Give the dyes, pieces of silk, bowl and sandbags to Auguste, then use the willow branches on the frame of the balloon to weave a basket. You see a short cutscene of the completed balloon.

No items can be noted, so multiple trips between a bank and Auguste will be required.

Ready for the maiden voyage

Items needed: 8-16 logs
Items recommended: You may want to chop 16 logs; if you don't follow the path described below, you will crash and have to start over, needing 8 more logs. You can chop some on the island if necessary.

After weaving the basket and with logs in the inventory, speak to Auguste to get ready to fly. He'll describe some of what the player should notice and some tips on how to fly the balloon.

The player will see the balloon-control interface. Manoeuvre through the obstacle course without hitting anything (including birds, trees, houses, and clouds) and safely land on the well-marked landing spot on the third screen.

The numbers at the side of sack and log buttons correspond to how many times player can use the resources, respectively; therefore, fuel is limited. If player runs out of fuel he or she can still "relax," or lower, altitude by pulling ropes.

How the balloon appears to travel is not as important as where it will end up. If the balloon meets a cloud right above it and a bird in front of it, it is possible to go right between both obstacles by dropping sacks or pulling the red rope, raising and dropping the balloon by 2 spaces, respectively. The balloon will fly high or low enough to avoid the bird and will advance one space forward to avoid the cloud. It might not seem like the balloon can fit through, but it can.

When ready to fly, you will move through three screens, showing your flight path to Taverley and balloon control interface.

There are various ways to control the balloon, and the following is just one of the suggested paths; however, using this path is highly suggested, as it works consistently. If you crash, you have to run back, get more logs, and return to the island, which turns what is a medium-length quest into a long one. 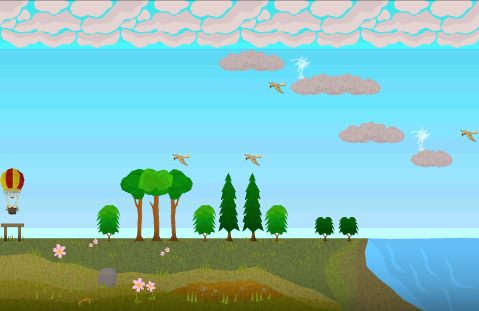 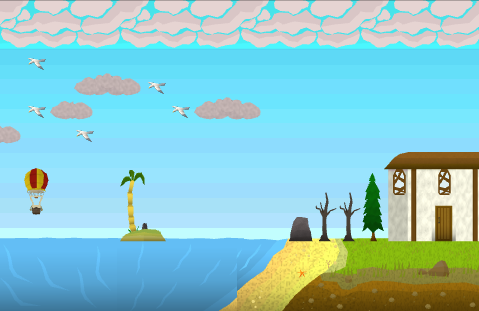 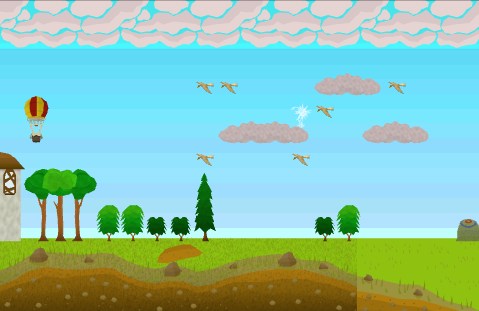 After the balloon has landed, talk to Auguste to finish the quest. 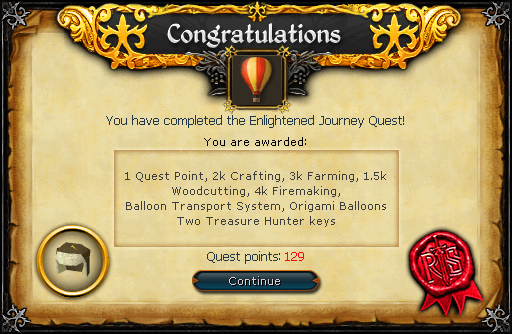 Completion of Enlightened Journey is required for the following:

Retrieved from "https://runescape.fandom.com/wiki/Enlightened_Journey?oldid=24303757"
Community content is available under CC-BY-SA unless otherwise noted.