Start a Wiki
This article is about the NPC in Varrock. For the Gower Quest NPC, see Ernie (Gower Quest).
Loading...
HumanZombie

On the first floor of a building, east of Aubury's Rune Shop. 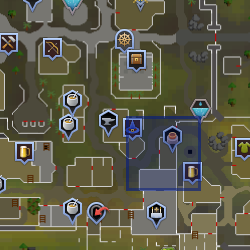 Ernie is a man who explains the purpose of urns to players. He can be found by climbing up the ladder in a building directly east of Aubury's Rune Shop in south-eastern Varrock; the building contains two potter's wheels and a pottery oven on the ground floor.

He appears to be "in love" with urns, hugging them constantly and showing obsessive behaviour about them.

During Dimension of Disaster: Curse of Arrav, his alternate dimension counterpart gives players a canopic jar after they fill a cooking urn for him.

Retrieved from "https://runescape.fandom.com/wiki/Ernie?oldid=22191203"
Community content is available under CC-BY-SA unless otherwise noted.